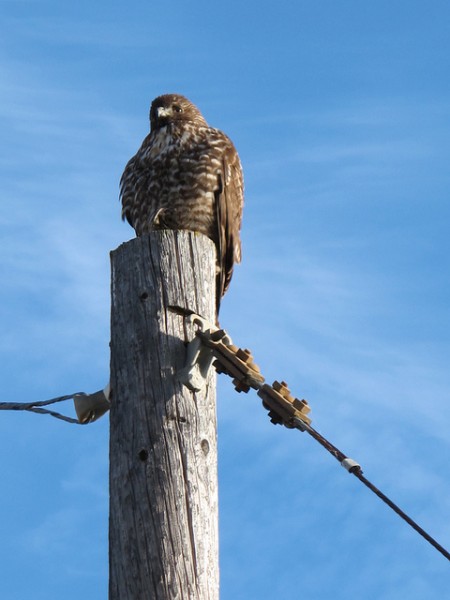 As we travel many miles daily to and from our fish monitoring sites we often take notice of the numerous raptors (birds of prey) present in California’s Central Valley. During the winter the Central Valley is home to one of the highest concentrations of raptors in the country (Pandolfino et al. 2011). A recent survey of winter raptors conducted between 2007 and 2010 found that the Central Valley supports roughly 90,000 wintering raptors comprised of 19 species (Smith 2011). Although this juvenile hawk perched roadside just long enough for us to capture a photograph, it was not long enough for this amateur birder to identify it to species. Even with wonderful photographs, raptors can be difficult to identify because most species have a variety of plumages, which can differ by age, sex, and color morph. Observers must be aware of field marks and the bird’s shape perched and flying, as well as listen for distinct calls and watch for behaviors. Bird identification requires nearly all your senses and is a skill best acquired by years of practice. If you’re an experienced birder then you likely already know that the 112th Annual Audubon Christmas Bird Count, the longest running citizen science survey in the world, runs from December 14, 2011 through January 5, 2012. So, grab your binoculars and join the tens of thousands of volunteer bird counters.