Channel catfish (Ictalurus punctatus), native to the Central U.S., are one of 7 catfish species introduced to California. They were first introduced to California in 1891 and were re-introduced multiple times until about 1930. There’s no record of channel catfish in the Sacramento-San Joaquin Delta until about 1942 after a group of businessmen thought it would be advantageous to have them in the American River. 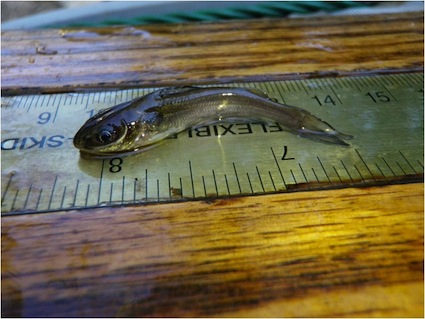 Once this juvenile channel catfish reaches adulthood (2-3 years) he will be ready to take on the roll of caregiver. Male channel catfish build nests inside cavities in banks, hollow logs, debris piles or rocks. Once a female lays eggs she leaves the male to care for them. The male catfish constantly fan the developing eggs with his fins to provide aeration and to remove waste products until the offspring hatch and leave to fend for themselves.