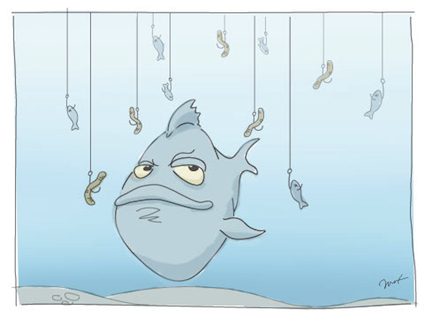 A recent article in Forbes online magazine by Camille Noe Pagan entitled, “Quit Multitasking (And Start Getting More Done)”, examines the disadvantages to multitasking in the modern workplace. She cites several studies that have shown the cost of divided attention. It turns out that fish experience a similar phenomenon.

In a study by Warburton and Thomson (2006) silver perch were first fed a single prey type, either brine shrimp (think Sea-monkeys) or bloodworm larvae. After a week of eating one or the other, the fish were offered both prey types simultaneously for up to 20 days. The researchers predicted that when the fish were presented with both types of food after eating only one, they would at first have lower feeding efficiency, but that over time that efficiency would improve with learning. Surprisingly, however, the rate at which the fish captured both familiar and unfamiliar prey dropped gradually over subsequent trials. The authors attributed this result, at least in part, to the cost of learning: divided attention.

Illustration by our own Max Boyd.