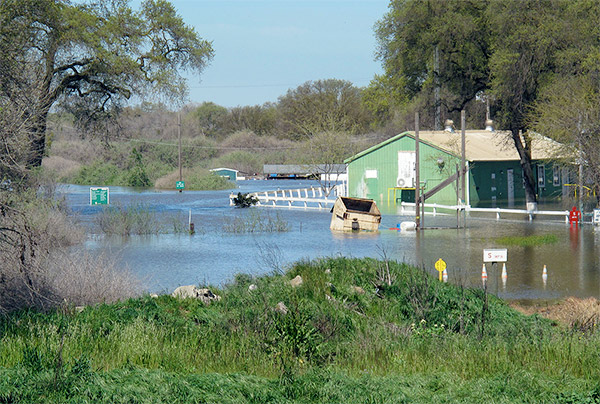 With downpours, floods, and atmospheric rivers all over the recent news, we thought it was a fitting time to take a look back at our post on California’s risk of a megastorm in today’s Flashback Friday:

California may have a reputation as an earthquake hotspot, but the state’s next major disaster could well be an epic flood. Scientists have learned that every two centuries, giant currents of vapor in the sky, known as atmospheric rivers, bring pounding rainstorms strong enough to inundate much of the state. The time interval is long enough to wipe these destructive events from collective memory, as California’s last massive flooding disaster is all but forgotten. On Christmas Eve 1861, torrential rains started–and didn’t stop for 43 days. Rivers from Sacramento to Los Angeles swelled and overflowed. The resulting foods washed away buildings, drowned a quarter of the state’s cattle, killed thousands of people, and bankrupted the state. But as much devastation as the 1861-62 flood wrought, a repeat performance today would prove even more catastrophic in these now highly populated regions. And based on the geologic record, another big deluge is on tap in about 50 years.

Scientists have linked these megastorms, and the floods they unleash, to atmospheric rivers, a phenomenon only discovered in 1998. These relatively narrow bands of vapor flow about a mile high in the atmosphere, and can stretch for thousands of miles–some all the way across the Pacific Ocean. Once the streams hit inland mountains like the Sierra Nevada, they rise up, cool, and condense into massive amounts of rain and snow. One example is the “Pineapple Express” that ferries moisture from Hawaii and the tropics to the West Coast. Most atmospheric rivers are weak, and deliver much of California’s vital water supply in conveyor belt fashion–but some dump rainstorms that last for a month or more. Scientists can document the resulting super floods by digging into layers of earth stretching back 2,000 years and looking for the signature of floodwaters that moved sediments around. Researchers have determined massive floods like the one of 1861-62 happen in California about every 200 years (Schimmelmann et al. 2003).

To better understand what such a flood might look like today, the U.S. Geological Survey recently modeled a storm about half the size of the 1861 deluge (lasting 23 days instead of 43). The predictions are sobering, to say the least. As in 1861, the Central Valley would turn into a muddy inland sea, 300 miles long and 20 miles wide. The disaster would require 1.5 million people to evacuate and cost nearly $400 billion in property and agricultural losses. Such findings make a strong case for early disaster planning. A network of four specialized observatories currently under construction along the California coast may play a part by alerting scientists whether a coming atmospheric river will cause a flood. Such advance warnings of about five days can help notify residents when nearby rivers will flood, and can help inform dam operators whether or not to release water. But to avoid repeating history, it may be better to scope out higher ground before the waters start rising.