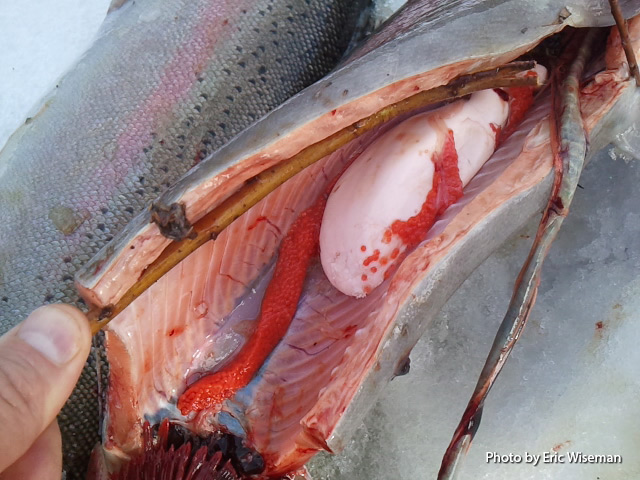 One of the more curious life history strategies observed among the vast diversity of fish species is hermaphroditism — the expression of both male and female sexual characteristics in a single individual. Hermaphroditic species are generally classified as sequential or synchronous. Sequential hermaphrodites begin their lives as one sex and switch to the other sex at a later time, either from male to female (called protandry) or from female to male (called protogyny). Triggers for sex change vary by species, and include social cues, as is the case with the ever-popular clown fish: the death of the female clownfish in a mating pair triggers the male to grow larger and become female (so in reality, Nemo’s dad would have turned into his mother…). For the California sheephead, age can be an additional trigger inducing sex change: all individuals are born as females, become reproductively mature between 3 and 6 years of age, and can remain female for up to 10 years before changing sex and living out the rest of their days as males (Cowen 1990).

Synchronous (simultaneous) hermaphrodites are those species in which individuals possess functional male and female reproductive organs at the same time. Fish that exhibit this adaptation include hamlets (various species of Hypoplectrus), which generally reproduce in pairs over multiple matings, with the two individuals taking turns contributing sperm or eggs. Self-fertilization, however, does not generally occur and has only been reliably documented in two species in the genus Kryptolebias (Harrington 1961; Tatarenkov et al. 2009). While hermaphroditism as a life history strategy is curious enough, observations of “hermaphrodites” in typically non-hermaphroditic species are even more likely raise eyebrows, and have inspired the curiosity of researchers for some decades. Reports of fish with male and female reproductive organs, such as the steelhead pictured above (orange ovaries and white testes), are generally rare, but have been documented for a range of fish species, including suckers (Hauser 1975), smelt (Hutchinson 1983), mosquitofish (Teh et al. 2000), pike (Vine et al. 2005), catfish, and bass (Hinck et al. 2009). In salmonids, hermaphroditism appears to be very uncommon, but published accounts exist for coho salmon, cutthroat trout, Chinook salmon and steelhead.

In recent years, more frequent observations of fish with both male and female organs, often from waterways near dense human populations, have raised concerns among scientists and the public. Male black bass with female germ cells embedded in their testes have been found in many of the major drainages across the United States (Hinck et al. 2009), and intersex roaches (the minnow, not the insect) are common throughout the waterways of Great Britain (Tyler and Jobling 2008). Affected fish often suffer from reduced reproductive capacity, but how this phenomenon could affect fish populations over time has not been sufficiently studied. The direct cause of intersex individuals is rarely known, but some research has identified synthetic hormones from medications, which enter rivers and lakes through effluent from wastewater treatment plants, as the source (e.g. Vajda et al. 2008). Though this doesn’t explain incidences of this phenomenon in sparsely populated and comparatively unpolluted and pristine areas, it does clearly illustrate a need for technology to remove synthetic hormones and other chemical compounds during wastewater treatment.