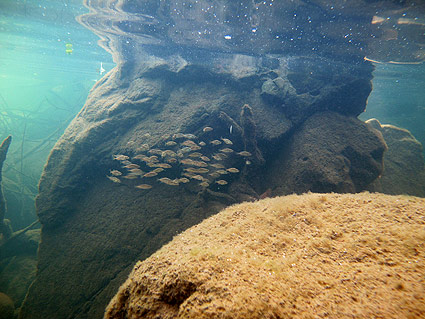 Fish school (group and swim in a coordinated manner) or shoal (loosely stay together for social reasons) for predator avoidance, reproductive advantages, hydrodynamic efficiency and foraging benefits. We have featured threespine sticklebacks (Gasterosteus aculeatus) in several earlier posts, such as Mr. Adaptable, Ol’ Blue Eyes and Evolution Happens, due to their interesting biology. 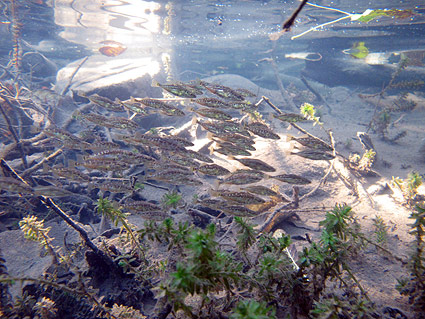 We spotted these threespine sticklebacks schooling in a California stream. Researchers have discovered three interesting foraging behaviors associated with schooling in this species: 1) When foraging in schools, the number of prey eaten per fish increases with school size, 2) when foraging alone, individuals select larger prey items than when foraging in schools, and 3) feeding rate increases with increasing fish size (Ranta and Lindstrom 1990). With these behaviors one would think that it would be advantageous to be a large fish in a school of smaller fish, but that doesn’t appear to be the case. Instead, when given a choice the fish tend to select schools of similarly sized fish. One theory on why this occurs is the ‘oddity effect’, a fish risks increased predation if it stands out in a crowd (Peuhkuri 1996).