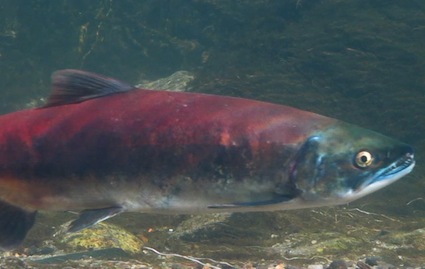 The photo of Oncorhynchus nerka, shown above, was taken in the Stanislaus River, a San Joaquin River tributary, last week (YouTube Video). From their distinctive green head and red body, these are obviously not the usual Chinook spawners. Neither kokanee (freshwater O. nerka) or sockeye (anadromous O. nerka) are considered typical native species of California. Kokanee were introduced from Idaho to a reservoir in northern California in 1941 (McGinnis 2006). Sockeye salmon are not generally found in California, but have occasionally strayed from the Columbia River basin into north coastal streams. Finding not one, but three, lost sockeye in the San Joaquin Basin would be quite surprising, however, not necessarily unprecedented. In their first two springs of rotary screw trapping on the Napa River, the Napa County Resource Conservation District found hundreds of unusual salmon fry. Using genetic analysis the fish were identified as sockeye salmon.

There are several possible explanations for why ‘sockeye’ fry or spawning adults may be appearing in Central California rivers. The most likely explanation is that the fish (or in the case of the fry, their parents) could have passed through several dams to end up in the lower rivers. In both instances there were reservoirs further upstream with stocked populations of kokanee. Adult kokanee may also have been illegally transported to and released in the lower rivers. The most unusual scenario would be that the fish originated from a very ‘lost’ group of sockeye from the Columbia River. The later hypothesis is unlikely, based on the smaller size of these fish (about 16 inches), since sockeye salmon grow to about 25-31 inches and kokanee mature at about 20 inches (Mc Ginnis 2006). If they had come from the Delta or the ocean, under typical conditions we could have identified the pair migrating up through the Stanislaus River weir, however there were several days of bad visibility (10/17-10/26) due to increased turbidity from an unusually high pulse flow in mid-October. During periods of high turbidity we rely on the Vaki Riverwatcher for fish identification, which provides a silhouette image of the passing fish. Unfortunately, the silhouette of a mature Chinook would not differ enough from a O. nerka to distinguish them; our technicians were not expecting to find passing sockeye. The other possibility is the fish could have passed over the weir undetected during a short period when the weir was partially submerged due to a heavy debris load. Of course, there is also the possibility that this adult pair, found in the San Joaquin Basin, originated as juveniles in the Napa River… If you fish or play in Central California rivers, keep your eyes peeled for the mysterious kokan-eye.