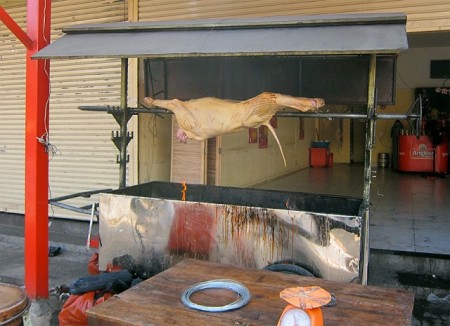 During our travels around the globe we have the opportunity to experience different cultures and customs, and one thing that remains unmistakably different are people’s tastes in food. For instance, while strolling through a street market in Cambodia we came across an animal, resembling man’s best friend, roasting on a spit; a little further down the street we saw several Dalmatians locked in small cages. For the most part, it is just a matter of regional customs, rather than how it actually tastes, that make food items acceptable. Watching locals in northern Laos harvesting “River Weed” didn’t exactly whet our appetites, but we later learned that it makes a tasty treat. When you think about it, what is the difference between eating lobsters and spiders? Not much.