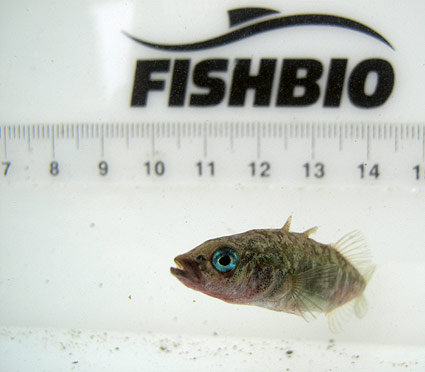 The springtime has inspired many a love song about the birds and the bees. For numerous local fish species, including the threespine stickleback (Gasterosteus aculeatus), it is the beginning of spawning season. Male threespine sticklebacks are generally rather bland in color, with an olive to dark green back and light colored belly, however during the spawning season they break out the bright hues. Their throat and upper belly turn a dramatic red, and their irises change to a vivid iridescent blue/green. This coloration can be highly variable among males and is generally muted in the inland populations. The fish in the photo above was recently caught in a rotary screw trap on the Salinas River. Getting all dressed up is just the beginning for the male stickleback. At this time males move away from the schools to set up breeding territories and construct a nest. Nest building involves picking up and moving sand to form a shallow pit. Then, algae and aquatic plant pieces are moved into the pit and glued together with an excretion from the kidney. After all this prep work, it is now time for this little guy to get his groove on (doing a zig-zag courtship dance) to attract a female.