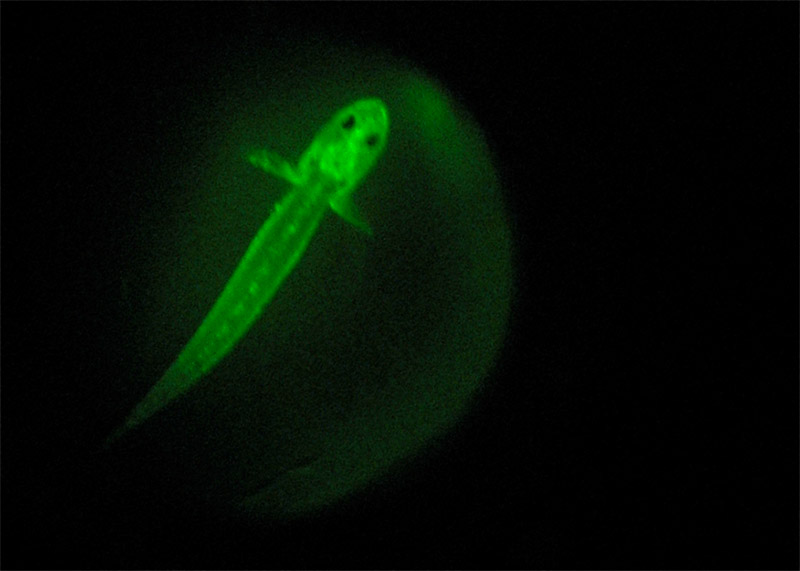 Though the fish pictured above may resemble a Halloween prop, they are in fact gobies that have been marked with calcein, a chemical that adheres to calcium-containing structures (bones) and fluoresces when exposed to light of a certain wavelength. Calcein is used for a wide variety of research applications, such as examining the deposition of growth bands in fish otoliths, identifying fish of hatchery origin, and estimating population size through mark-recapture experiments (e.g., Wilson et al. 1987, Mohler 1997, Negus & Tureson 2004). Fish can be exposed to calcein in a variety of ways, and study specimens are generally marked by immersion, allowing researchers to mark large numbers of individuals simultaneously.

In contrast to external marks or tags, calcein induced marks are not detectible by the naked eye and do not appear to have any detrimental effects on the fish’s health, swimming performance or its ability to hide from predators (a crucial factor in mark-recapture studies, which assume that marked and unmarked fish are equally likely to die or survive). The telltale fluorescent green glow of calcein only becomes visible under special detection lights containing various filters, which allow researches to distinguish previously marked fish from unmarked individuals. After several months the calcein mark fades, and it is no longer possible to detect the calcein on a live fish under the detection lights. However, the chemical is permanently incorporated into the internal, bony structures and examination of fish otoliths still allows for identification of previously marked fish.

The FDA currently limits the use of calcein on food fish (a fish that may be consumed by humans) to individuals weighing less than 2 grams. While this means that we can’t use calcein on salmon smolts during rotary screw trap efficiency trials, it may very well have an application in future studies requiring the marking of salmon fry – if so, we’ll be sure to share some pictures of glowing salmon!