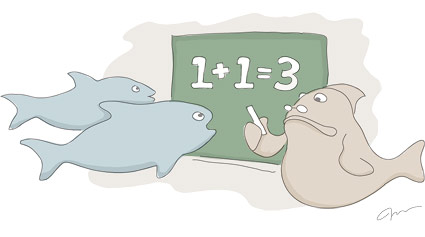 The classic Dr.Seuss book that taught many kids to count, but scientists want to know: can fish count each other? Psychologists from the University of Padova in Italy recently found that female mosquitofish (Gambusia holbrooki) were capable of using numerical information to select a school of fish (Dadda et al. 2009). In the past, researchers have found that fish can distinguish between large and small schools of fish. However, as researchers changed the number of fish in a school, they also inadvertently increased the density and the amount of space the fish took up. Therefore, a fish selecting a larger school may have been perceiving a difference in overall size of the school rather than actually counting the number of fish. In order to assess the numerical capabilities of fish, test fish (i.e. the”counting fish”) were offered two options. A large aquarium was divided in half, with a narrow passage between the left and right halves. On each side there were smaller compartments set up with individual female mosquitofish inside. On one side there were more fish in individual little glass “rooms” than other side, depending on the experiment (3 vs. 2 or 8 vs. 4). The set up was such that the counting fish could only see one individual at a time, and could not observe the total area of the school. In both scenarios, despite only being able to see one fish at a time, the counting fish spent significantly more time on the side of the tank with more fish, than on the side of the tank with fewer. This was not affected by whether the researchers altered the density of fish or the total space occupied by the fish.

Illustration by our own Max Boyd.