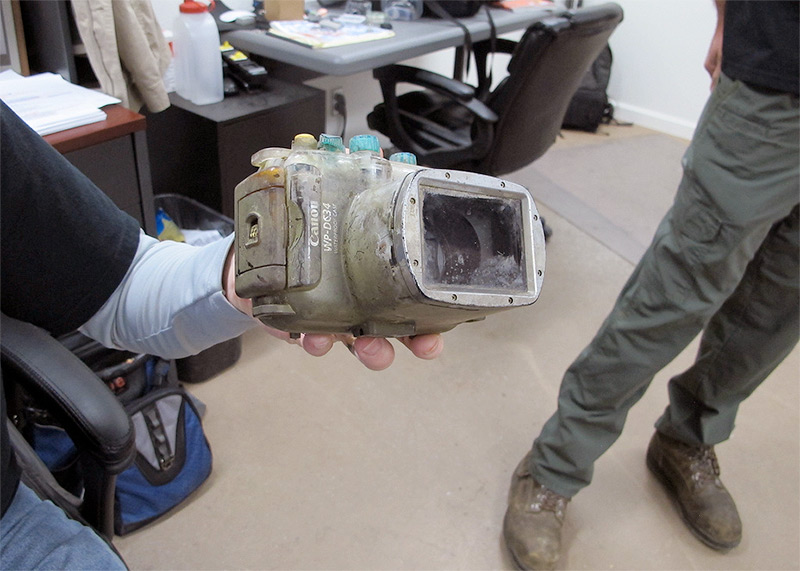 Considering how much gear we station underwater or deploy floating in California’s rivers, it’s remarkable that we’re able to keep track of and recover it all—well, almost all. We have a few good stories of gear lost and found (see Lost), but this one is a winner. You may be familiar with our method of setting up underwater digital cameras to record Chinook spawning behavior, since we recently posted a few videos and stories on the topic (see One-to-one spawning, Casual spawning). Back in November 2011, we set up an underwater camera in a local river to try and film salmon spawning. While the vast majority of fish pay no mind to our equipment and just go about their business, one female salmon didn’t take too kindly to our Peeping Tom tactic. She thrashed the offending camera until it unscrewed from its base and drifted away.

How do we know? Because last week, more than a year after the incident, a California Department of Fish and Game crew conducting carcass surveys stumbled across the camera on the riverbank. Recognizing it as ours, they returned it to a FISHBIO team conducting redd surveys nearby. To our surprise, the inside of the camera housing was still dry and the camera still worked! Its surveillance video (below) caught the culprit in the act; you can see the salmon whacking the camera until it floated downstream to its temporary resting place. So other feisty Chinook, take notice: we’ve got an eye on you.