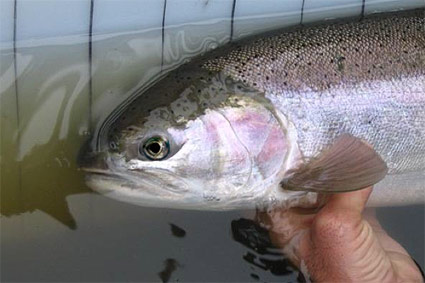 Much like Chinook salmon stock abundance that has been variable up and down the West Coast over the last few years, this year’s hatchery steelhead returns are down in California’s Central Valley, but up at coastal tributary hatcheries.

California coastal tributaries are faring better for steelhead this year than the Central Valley. The Warm Springs and Coyote Valley Hatcheries in the Russian River Basin are up 265% and 292%, respectively. Further up the coast Mad River Hatchery steelhead returns are up 487%, or 1,372 fish this year compared to 282 last year. Interestingly, the Trinity River Hatchery is 181% for the same time period last year, whereas Iron Gate Hatchery on the Klamath River is lower than last year, with only 21% of last years abundance.