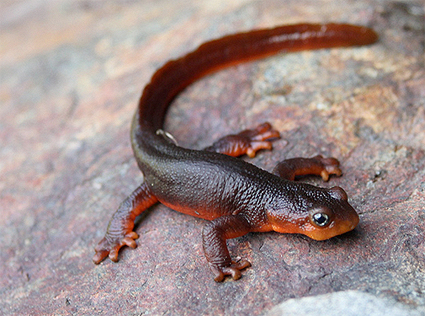 The Sierra Newt, Taricha torosa sierrae, is a subspecies of the California newt endemic to the western slopes of the Sierra Nevada Mountains from northern Shasta county south to Tulare county. While many salamander populations are on the decline throughout the U.S., this one has an adaptation that allows it to survive in lakes and streams containing hungry trout. The eggs, embryos, and adults possess a potent neurotoxin, tetrodotoxin, the same toxin as found in puffer fish. As a result, introduced brown trout and native rainbow trout tend to leave them alone. We photographed this one while conducting fish and wildlife surveys in a reservoir near Lake Tahoe.