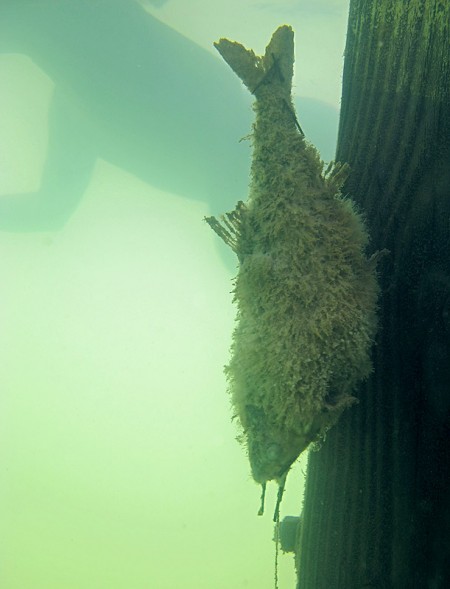 On a recent dive in a Sierra Nevada lake we spotted this unlucky fish that had been hooked and entangled around the dock pillar. This got us thinking about the potential mortality of fish once they’re caught by an angler and the effect of different angler gear on fish survival. A review of previous studies on the hooking mortality of non-anadromous trout by Schill and Scarpella (1997) revealed some surprising results. By analyzing data from past studies they concluded that there is no significant difference in the hooking mortality of trout caught and released using barbless hooks and barbed hooks. Taylor and Barnhart (1996) found no significant difference in hooking mortality of summer steelhead between single and treble hooks, but they did find a positive correlation of increasing mortality with increasing water temperature. Post-hooking mortality of steelhead caught and release in water below 64.4°F (18°C) was less than 5%, whereas fish captured in water 71.6-77°F (22-25°C) had a hooking mortality of 17-34%. A recent study of hook type on an Alaskan rainbow trout catch-and-release fishery found that barbed “J” hooks took longer to remove and injury rates were higher than for barbless (Meka 2004). Angler gear selection and fishing regulations will no doubt continue to be a hot button issue, but when it comes to using barbless hooks, even if they don’t significantly increase survival, it sure makes fishing more sporting.