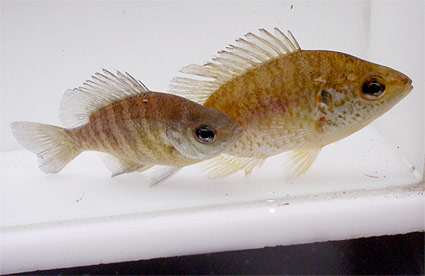 Bluegill and redear sunfish are common fish belonging to the centrachid family, a group of similar fish that includes crappie, largemouth bass, and smallmouth bass, among others. Although the centrachid family is relatively small with only 30 species native to North America, it contains more gamefish than any other freshwater family in the United States, and only one species, the Sacramento perch (Archoplites interruptus), is native to California. Unfortunately, the Sacramento perch is now largely extirpated from the Sacramento-San Joaquin Delta, at least partially due to the introduction of it’s non-native cousins.

These  harmless looking bluegill (Lepomis macrochirus – left) and redear sunfish (Lepomis microlophus – right) are now two of the most abundant fish species in the Delta, where they compete for food and space with native fish. Blugill were intentionally introduced to California as forage fish for black bass around the turn of the century, and redear sunfish were introduced in the 1950’s, also as forage for bass and as a gamefish.

Bluegill are identified by a blue or black flap on the rear of each operculum and a dark spot on the second dorsal fin. Mature redear sunfish are distinguished by the bright red or orange spot on the posterior edge of the operculum.