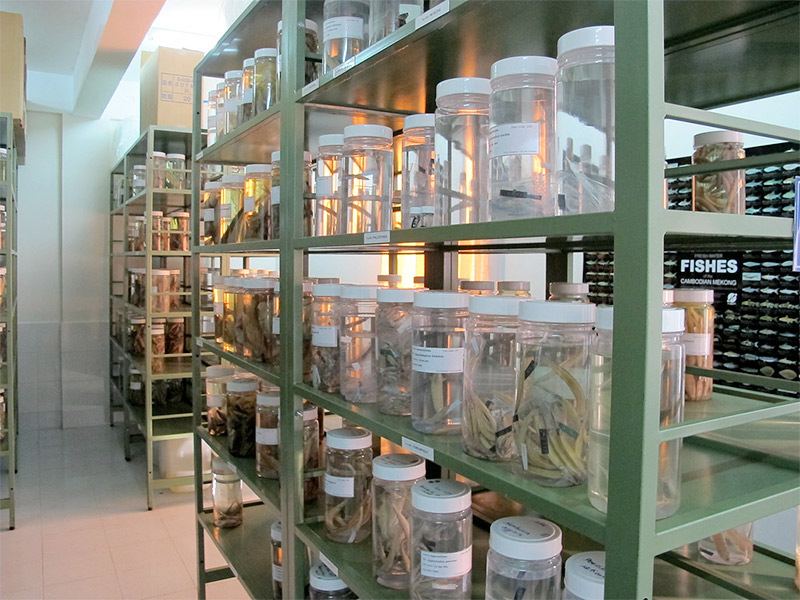 Cataloging all of the fish species that live in your backyard can be a massive undertaking if you live in a place as ecologically diverse as Vietnam’s Mekong River Delta. But researchers from Can Tho University in Vietnam are attempting to do just that, and have produced some new scientific discoveries in the process–including a fish with sex organs on its head. While documenting the region’s fish diversity, the scientists are also amassing a collection of voucher specimens for the university. These “pickled” fish, preserved in formalin and stored in jars of alcohol, provide physical evidence to back up the reports of hundreds of species described in the Mekong, and also make a valuable teaching tool for students.

In 2012, Can Tho University researchers participated in a Mekong River sampling project that spanned Laos, Thailand, Cambodia, and Vietnam. Once it reaches Vietnam, the Mekong fans out into a braid of smaller rivers that meander to the ocean. The researchers in Vietnam spread their survey across a variety of habitats, including canals, swamps, rice fields, mudflats and mangroves. The team deployed an arsenal of different nets and traps to collect fish, and also sampled the catch at local markets. They collected and identified 292 different fish species from the Vietnamese Mekong alone. Of these, 67 had never been found in the Mekong before, including five species completely new to science.

One of the new species rocketed to instant Internet fame last summer as the “penis head fish.” The males of the tiny fish Phallostethus cuulong, which measure only 3 cm in length, have a sex organ called a priapium under their chin. The male uses a hook on the priapium to latch on to the female, then deposits sperm internally. The female’s genital opening is also located in the throat region, as is the anus on both males and females (Shibukawa et. al 2012). Such unusual anatomy makes for a rather curious execution of bodily functions.

Of the Mekong countries surveyed for the project, Vietnam had the highest proportion of fishes found nowhere else in the region (52%), while Laos and Cambodia each had a much smaller proportion of unique fishes (less than 25%). The scientists think Vietnam’s more distinctive fish diversity comes from its greater variety of habitats, which include estuaries where the Mekong meets the sea. The most common fishes in Vietnam included gobies (54 species) and cyprinids (48 species). Such fishes are mostly small and not commercially valuable, which may explain why so many have slipped under the scientific radar until now. Even if these fishes wouldn’t make it to market, they are still important to science and the balance of a healthy ecosystem–and they deserve to be counted.