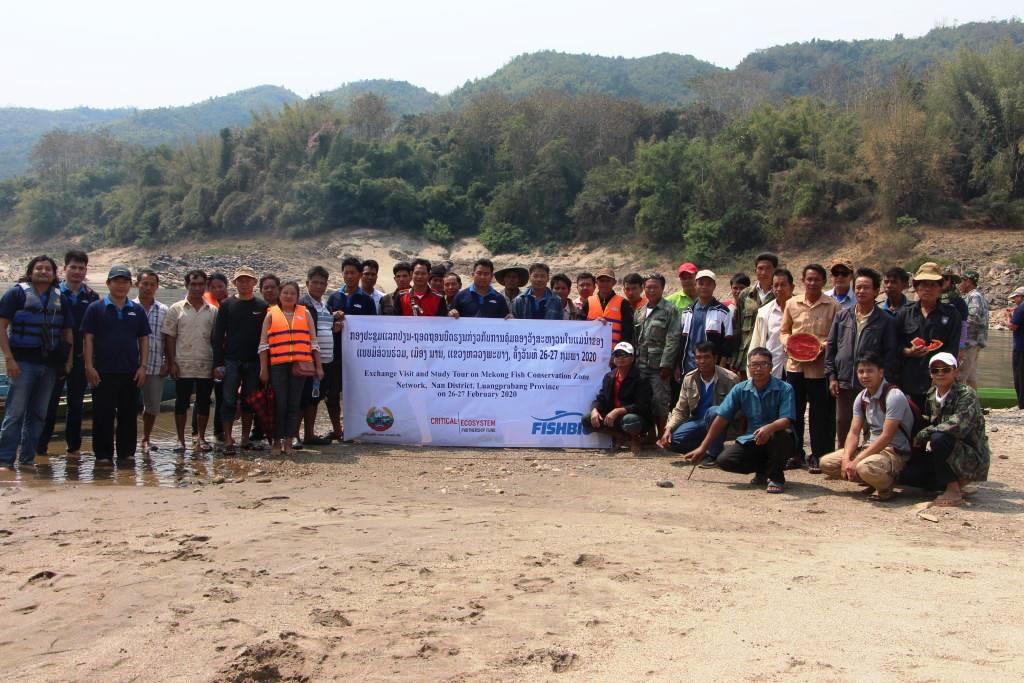 Since 2014, FISHBIO has helped to establish seven Fish Conservation Zones (FCZs) at nine villages in northern Lao PDR with funding from the Critical Ecosystem Partnership Fund (CEPF). FCZs are no-fishing areas managed by the community to protect critical fish breeding and nursery habitats, while also limiting the overharvest of target species such as Probarbus fish in the Mekong River. The success of any FCZ depends upon the local community respecting the fishery regulations, continued effort of patrolling and enforcement, regular community meetings to address any conflicts or concerns, and long-term support from the government (district and village level organizations) in decision-making. Essentially, building support from stakeholders involved in fishery management is critical to achieving the overarching goal of creating FCZs. One way to build this support is by creating a network between project villages and strengthening it with a communication platform that allows experience sharing and exchange of ideas for enhanced FCZ management.

FISHBIO previously organized a study tour in March 2018 that brought together seven communities from Sanakham, Kenthao, Xayabouri, and Nan districts Vientiane, Xayabouri, and Luang Prabang provinces for learning from one another. After the addition of three new FCZs in 2019 (Sa Kai 1 – Tha ban; Sa Kai 2 – Khone kham, and Ang Noi) in Sangthong District, Vientiane Capital, it was time for another networking opportunity, especially to allow the new FCZ villages to learn from the others through face-to-face interaction and FCZ tours. 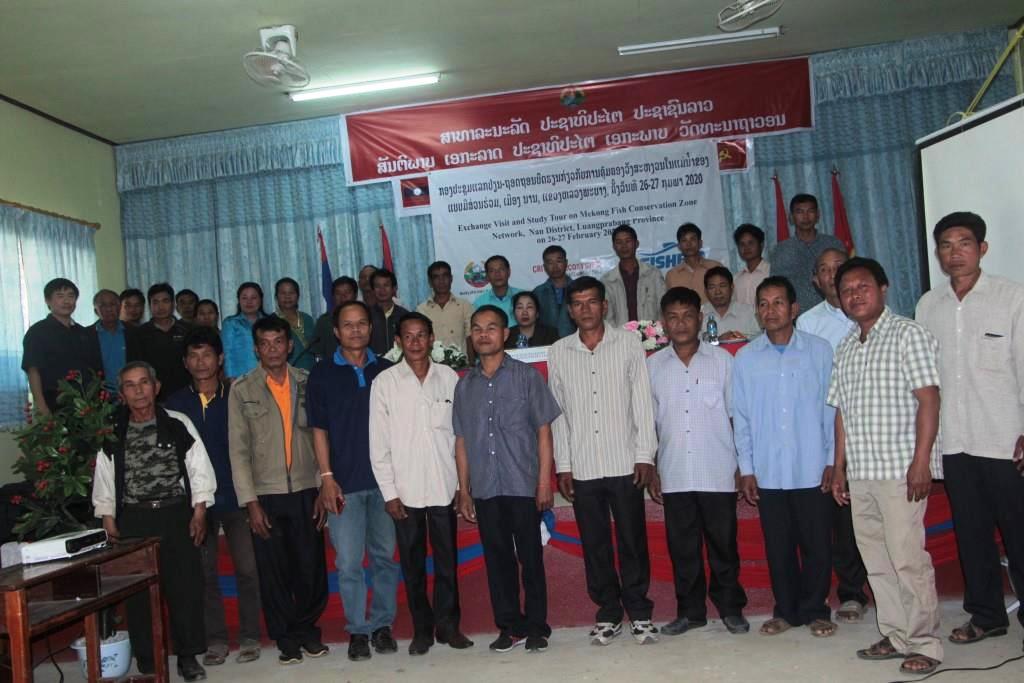 From February 25–28, 2020, FISHBIO organized its second study tour and exchange visit as a component of the CEPF project Strengthening Community Co-Management of a Mekong River Fish Conservation Zones Network. This was an opportunity to bolster the existing network between communities with FCZs, and also train community members in conflict management strategies around fisheries regulations and compliance. On February 26, a meeting was organized to inaugurate the study tour with welcome remarks from the Nan District Vice Governor Mrs. Hongkham. A total of 50 people attended the meeting at the auditorium of Nan District Education Office in Luang Prabang Province. The participants were a mixture of people from the FCZ villages (30 people), Department of Livestock and Fisheries sub-district, district, and provincial-level staff and the District Vice Governor (17 people), and FISHBIO Lao staff (3 people). FISHBIO staff provided an an overview of the CEPF projects that supported the establishment of FCZs in 7 designated sites of the nine villages. After that, the representatives from seven participating communities (Ang Noi and Houayla villages were unable to attend) presented updates on their FCZs, their experiences of FCZ management, patrolling, enforcement and constraints, and recommendation for improved management in future.

During one of the sessions, we familiarized the participants with our virtual communication platforms: a WhatsApp group and two Facebook pages (FISHBIO Laos and Fish Conservation Zone Mekong Fish Network), where we share updates from our FCZ projects to build awareness about the conservation of Probarbus fish and other endangered aquatic animals. Our hope is that community members will use these platforms to communicate information and updates that would help improve FCZ management, and some are indeed already using it. 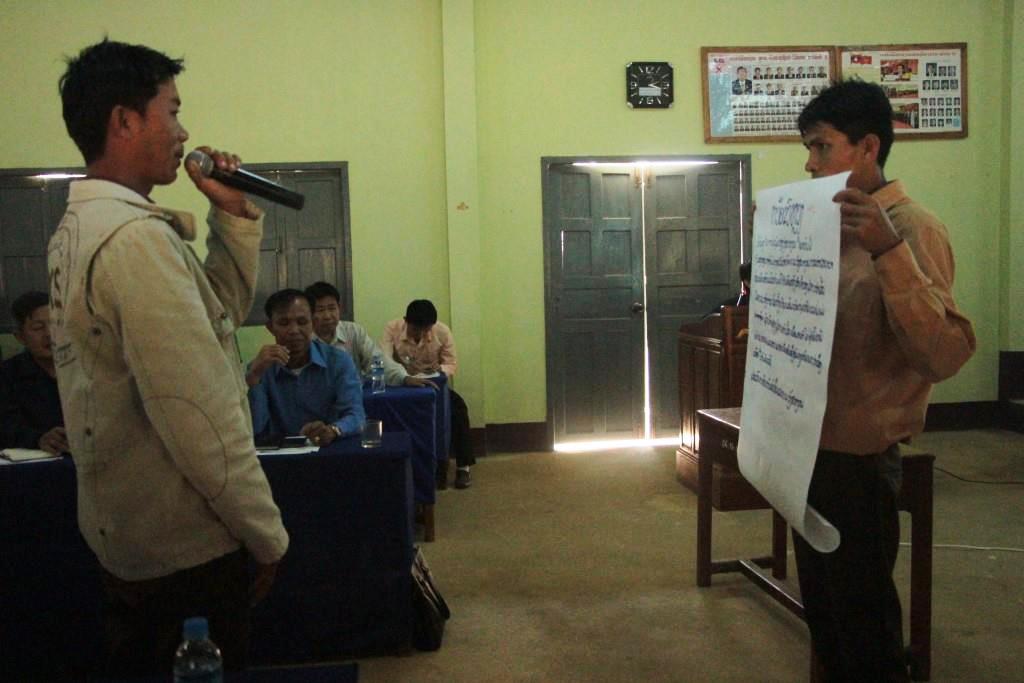 The conflict management portion of the workshop included a presentation from FISHBIO introducing conflict types and management styles learned from a previous training in Vientiane Capital. We then engaged in group exercises separated by village to perform activities such as conflict mapping. As part of the exercise, each group discussed the problems that arise while managing an FCZ, who addresses the issue, the direct and indirect impacts associated with conflicts, and follow-up action. People presented their results in pairs and also shared their practices of enforcement and conflict management in villages. Most said the FCZ management committee investigates the issue in consultation with government officials (sub-district office) and the village committee, and deals with violators according to the FCZ regulations. Villagers recommended collaborative action between villages and government staff (sub-district officials) for outreach activities, patrolling, and any follow-up action regarding violations and conflicts. 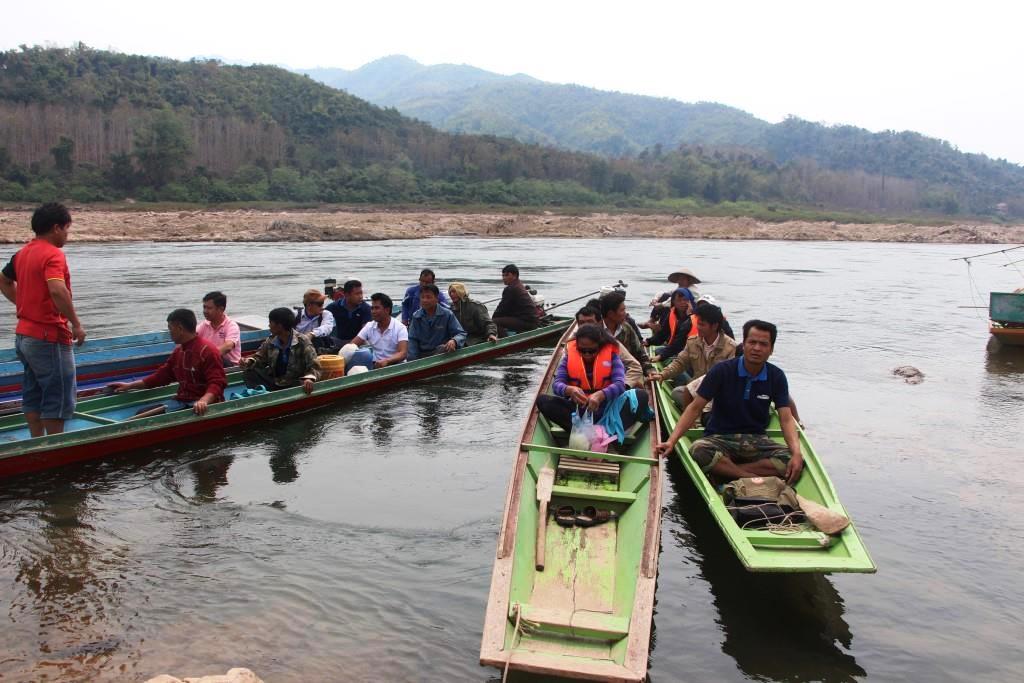 On February 27, participants traveled to Houaykhoulouang village to visit the oldest FCZ sites: Houaykhoualouang, Korkfak and Pakpui FCZs, established in 2014. These FCZs protect deep pool habitats that are important refuge habitats. We started our boat tour at Houaykhoualouang FCZ, sharing stories of the deep pools and objectives behind selecting the sites. We observed multiple no-fishing and FCZ regulations signs along the shore as we kept moving, and then we stopped by Pakpui FCZ for lunch on the sandy beach. Finally, we traveled back to the Houaykhoulouang village office for group discussion to gather more information about the governance style from all the participating villages using indicators from the FCZ assessment guidebook developed by FISHBIO: G1 Existence of an active management committee, G6 Clear enforcement procedures and level of patrolling effort, and G7 Level of compliance with FCZ regulations. Each village representative shared their FCZ organizational structure, decision-making body, range of issues discussed in the community meetings related to FCZs, general decision-making process, enforcement procedures, violations, record keeping, and challenges.

The participants reflected positively on their two-day experience at the end of the event, saying  they learned new insights from attending the study tour, especially the opportunity to travel beyond their villages and mingle with people from other FCZ villages. The exchange visit helped to familiarize those villages new to FCZ management with more experienced villages. The training also helped build common ground for all stakeholders to take collaborative action against illegal fishing and FCZ-related conflicts. We hope this was a valuable contribution to sustaining the long-term management of these community FCZs into the future.

This post was written by Biraj Shrestha, a master’s student at the University of California, Santa Cruz who is completing a capstone project with FISHBIO Laos as part of the Coastal Science and Policy Program.