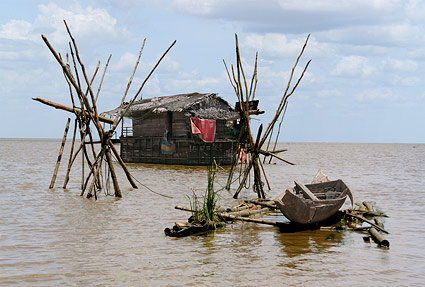 For most of us in the United States, the thought of not having a job is either a dream, or anxiety inducing. For much of the world, however, the lack of a daily commute and 9 to 5 grind are a reality. This is not due to lack of motivation or aptitude, but rather lack of need to work at a traditional job, or the lack of industry in many parts of the world.

This community on Tonle Sap Lake in central Cambodia consists of fisher-people whose job is living off the land. In the evening, they venture out in small boats and set gill nets when fish are most active and catches are maximized. In the morning, the nets are collected and excess harvest is taken to a trading station on the bank where it is traded for staples such as rice, vegetables, charcoal, and fuel. Fishing in this large lake is dangerous because storms generate swells that easily over-top the small boats.