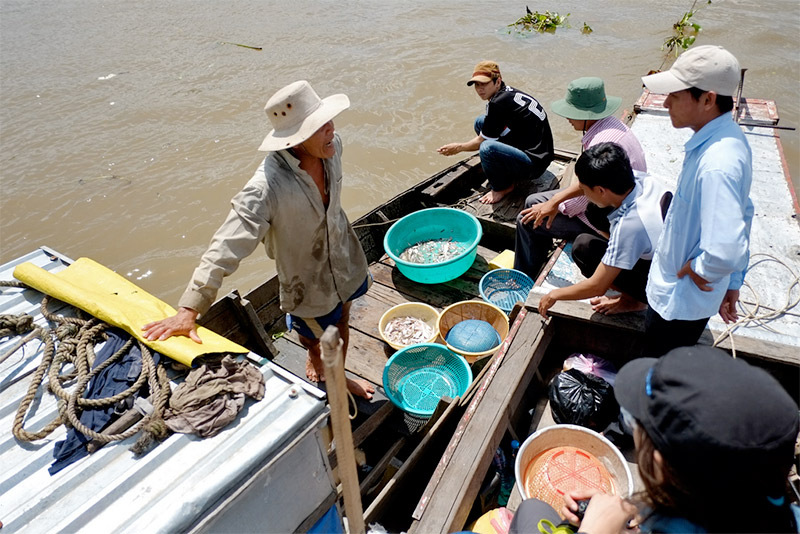 What’s a fish surveyor to do when someone beats you to your fishing spot? Researchers from Vietnam’s Can Tho University have learned: if you can’t beat ’em, buy from ’em. FISHBIO tagged along while the Vietnamese fish researchers conducted a survey on the Hau River, a tributary in the Mekong River Delta (see The Mekong’s Amazon exotics, Trawl full of trash). The team is trying to document the fish diversity of the region and study how fish composition changes with the seasons. FISHBIO is working to standardize sampling in the Vietnamese section of the Mekong with our fish sampling of the river in Lao PDR.

The Can Tho University team hires local fishers to use their gear for the surveys (see Small-scale trawl). With so many fishers scooping nets through the same stretch of water, some overlap is bound to occur. We pulled up to one of the scientists’ regular sampling locations just in time to see a fisherman haul in his catch. He had effectively just sampled the area and removed the fish, so we pulled our boat alongside and the researchers asked to buy his catch. The transaction went smoothly, and probably didn’t hurt that it was a family affair: the man happened to be the grandfather-in-law of the fisherman driving our own boat. In their quest to characterize the region’s fish species diversity, the research team regularly buys fish from boats on the water and surveys the catch in local markets. They take fish specimens from the river and markets back to their lab for identification and genetic work. It seems that even when doing scientific fieldwork, it pays to have some cash on hand.