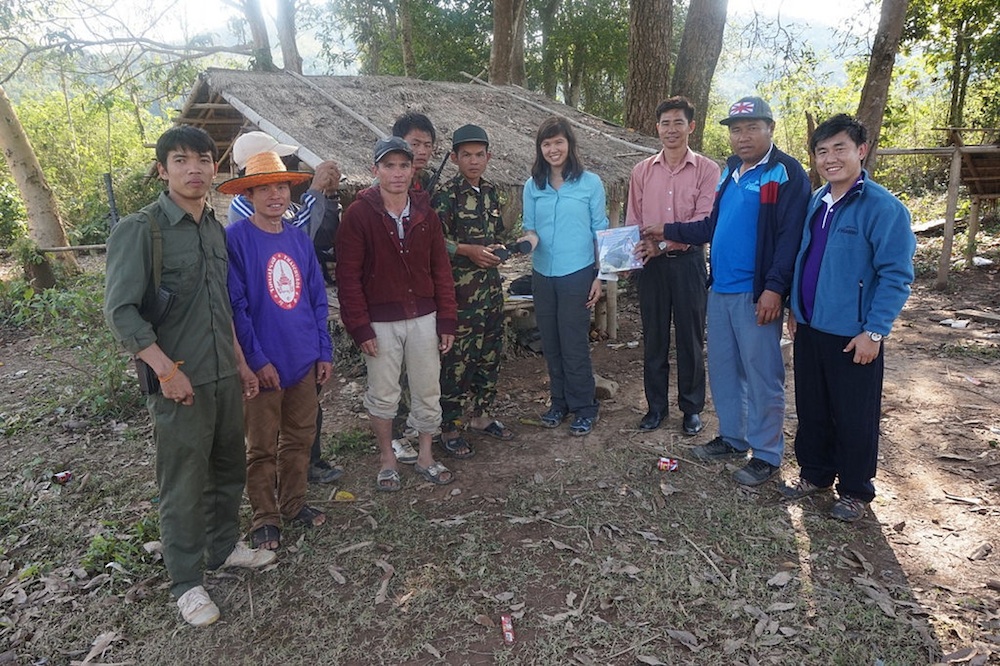 Our Laos team recently paid a visit to the communities we’ve been working with to establish a Fish Conservation Zone (FCZ) in Kengmai Rapids, Laos. We were accompanied by a colleague from the International Union for Conservation of Nature, who was representing the project donor (Critical Ecosystem Partnership Fund) for a project assessment. We started our trip with a meeting at the District Governor’s office, where local officials said they hoped to make Kengmai Rapids a model for establishing FCZs, which are community-managed no-fishing areas. While local officials had previously tried to establish FCZs in some small streams, these efforts eventually faltered, which they attributed to a lack of outreach and training for community members. The extensive engagement and training FISHBIO has provided during our FCZ establishment work has been key to garnering community support for our projects thus far. 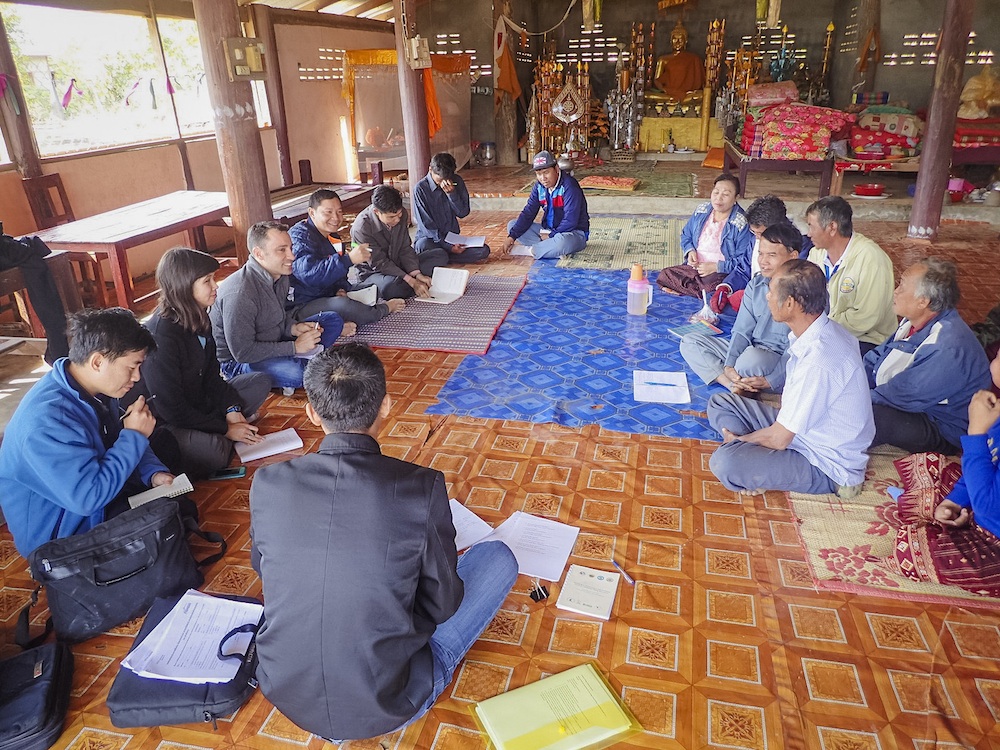 We then held a community meeting with the FCZ committee at the local temple in the village of Ban Phalat in Vientiane Province, one of four villages participating in our project. The committee discussed their efforts to educate their neighbors about the rules of the FCZ – they said local residents now have a good idea of where the FCZ boundaries are. This no-fishing area was established with the goal of protecting endangered Probarbus fishes, in addition to protecting other important fish for local food consumption. One of the committee members said he had caught a 9-kg (20-lb) Probarbus fish outside the FCZ the week prior to our visit. The fish sell for about $6/kg, meaning that a single fish is quite valuable. While it may be difficult to discourage all harvest of this endangered fish, we hope that by protecting the Probarbus spawning ground in the FCZ, the species will have a better chance at survival. One of the women present at the meeting said that in June and July, villagers often catch juvenile Probarbus in the scoop nets used to catch shrimp. Fortunately, these young fish can be released alive. 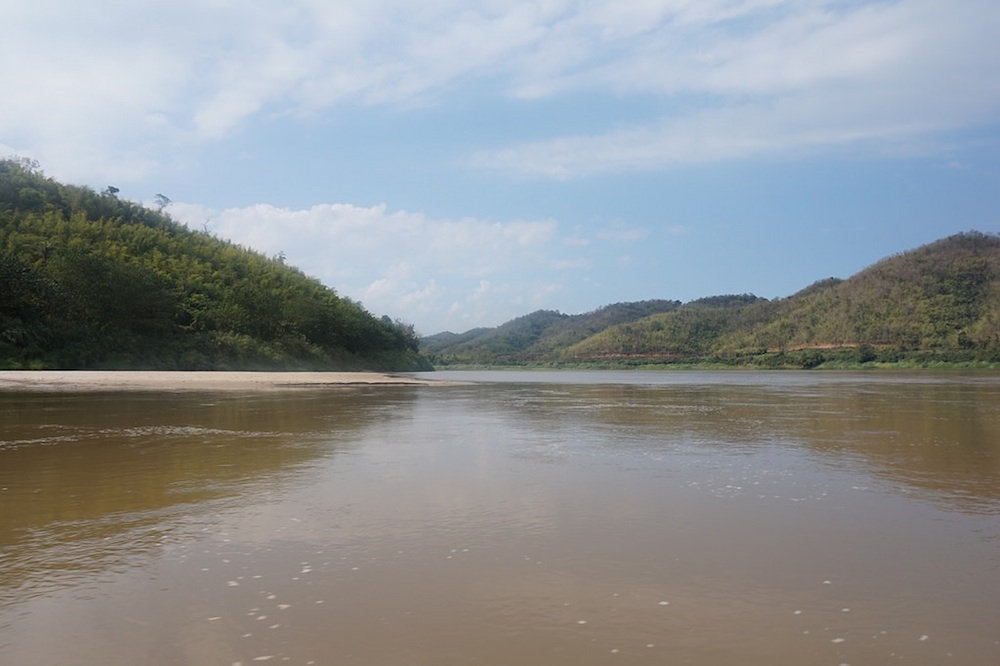 We then met up with the enforcement team from Ban Houayla, the village across the river in Xayabouri Province. The enforcement teams include village soldiers and security officers, so we found ourselves with a heavily armed escort. We presented some binoculars for the enforcement teams to use in their patrolling of the protected area to spot illegal fishers. The soldiers hardly needed training in how to use these new tools – with their military attire, they looked quite official! The team then took us on a tour of the Fish Conservation Zone. Birds skimmed over the surface of the water and our boat passed thick vegetation growing along the steep banks of the river. We travelled a few twists and turns of the river that comprise the 5-km long protected area. 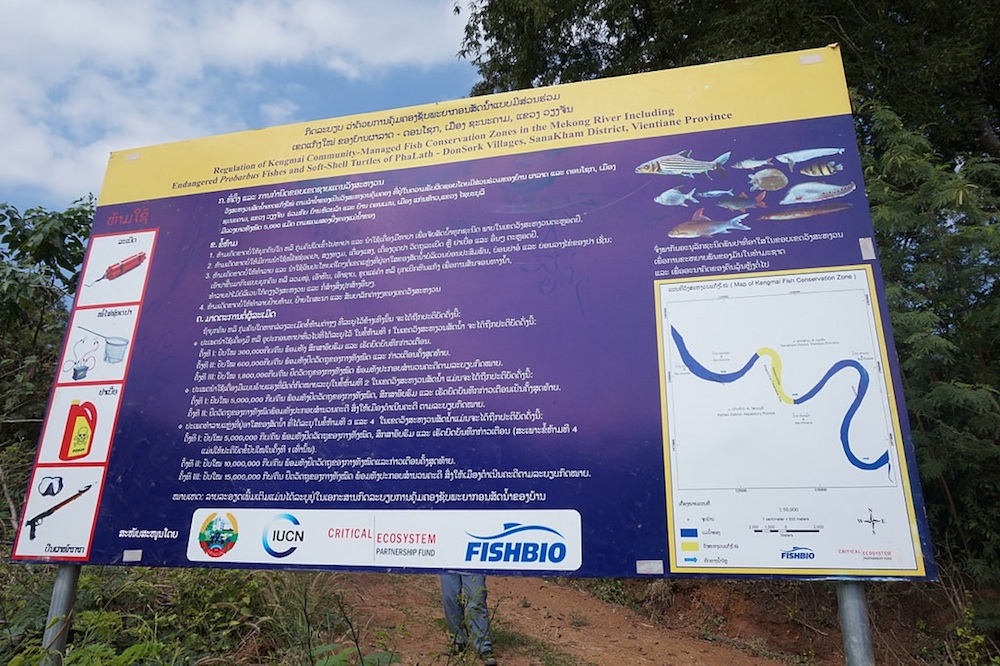 Midway through our journey, we climbed ashore to visit a farmhouse along the border of the FCZ. The resident family told us they used to hear the explosions of people fishing with dynamite in the river at night – but since the establishment of the FCZ, the river is now very quiet. One older woman told us that she now has to travel farther to go fishing because the farm is right in the middle of the FCZ, and the area where she used to catch fish is now protected. The extra effort is challenging because of her age, but she still said she thought the FCZ was a good idea to protect fish for future generations. We’ve heard this sentiment echoed repeatedly during our FCZ work in Southeast Asia – despite some restrictions on their fishing behavior, local people see the value of protecting their natural resources for the benefit of their children and future descendants. We hope this desire will provide a strong foundation for successful conservation efforts.