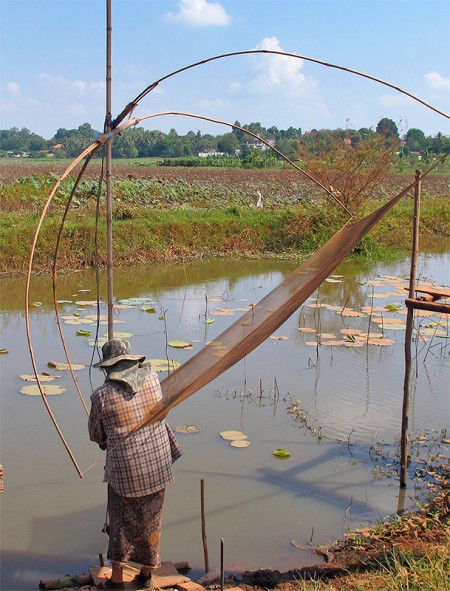 Lift nets (called Gadung in Lao) are one of the most common types of fishing gear used in Southeast Asia. The gear consists of a fine net suspended by four corners to a wooden frame (see Cantilever contraption). Fishers leave the net in the water for some time, then slowly lift it, trapping any fishes and aquatic animals swimming above the net. A small, hand-held version is commonly used in quiet water along riverbanks, in canals, and in flood plains, and is the gear that women fishers most frequently use. The lift nets in these pictures operate in the canal of Thatluang Marsh in the Lao capital of Vientiane. FISHBIO staff working on our international conservation projects in Lao PDR interviewed part-time women anglers about their fishing practices in this area. The primary fishing gear used in this marsh includes cast nets, gill nets, hook and line, fish traps, and lift nets. Fish typically caught with lift nets include three spot gourami (Trichogaster trichopterus), snakeskin gourami(Trichogaster pectoralis), climbing perch (Anabus testudineus), pale rasbora (Rasbora aurotaenia), Nile tilapia (Oreochromis niloticus), shrimps, and other aquatic animals. The area currently available for fishing in the marsh is smaller than it was five years ago due to a land concession to foreign investors to build a Chinatown. 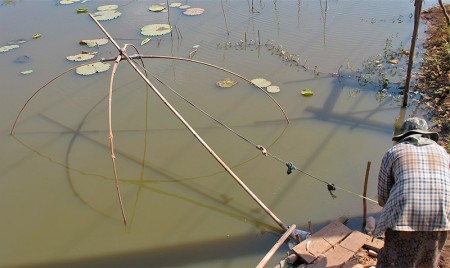