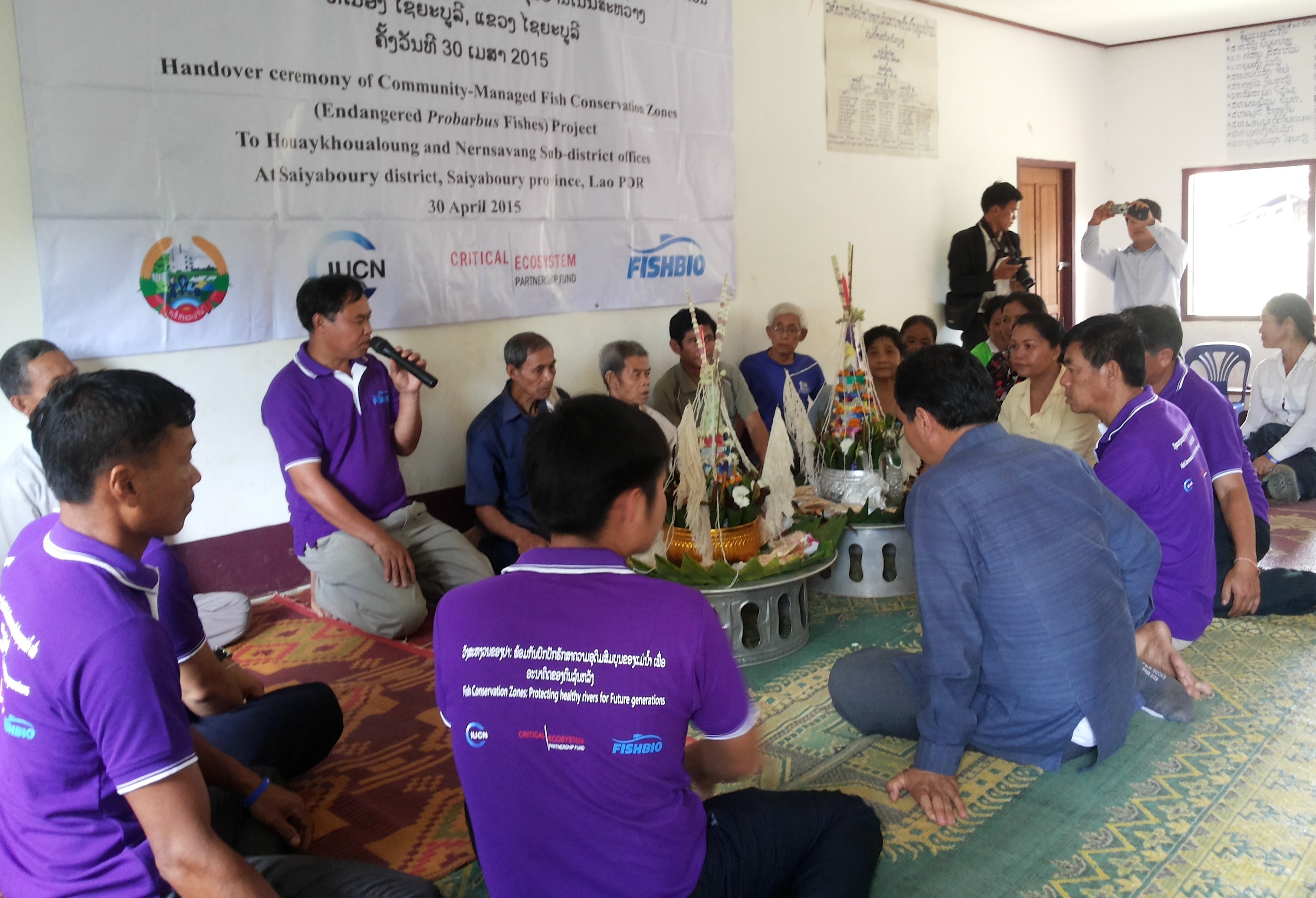 The success of community-managed Fish Conservation Zones (FCZs) depends in large part on communities feeling a sense of ownership and responsibility to actively manage and conserve their local natural resources. As the funding for our first CEPF-supported project to establish FCZs in northern Laos drew to a close, we wanted to ensure that the three villages we worked with were fully prepared to take on the management of the new FCZs with the help of local authorities. At the end of April, FISHBIO staff hosted a transition workshop with the communities to review the progress of the past year, and hand over the official project management. The 36 workshop attendees represented many different groups, including community members and a variety of officials from the District Governor’s office, the District Agriculture and Forestry Office, the District Justice Office, the District Military Office, and the sub-district government office. The workshop served as a chance to review the project’s activities, successes, and challenges, and discuss areas for improvement. 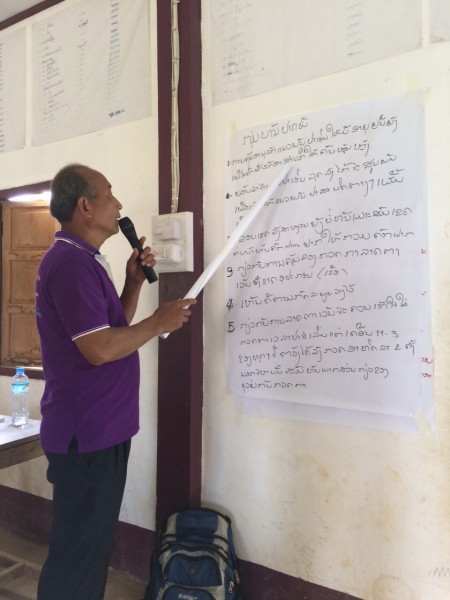 The major take-home message of the workshop was that the project has been very successful in establishing three FCZs and enforcing their regulations. Village enforcement teams have confiscated several nets and fishing lines from the FCZs during their patrols, and once apprehended four fishermen using illegal electrofishing gear, who were subsequently fiend. We discussed the need to improve record keeping by the patrol teams during the Probarbus spawning season, since some teams were not consistent in filling out their patrol logbooks. FISHBIO staff also recommended that communities should consult sub-district government staff to help resolve any issues related to the distribution of fishing fines. We also discussed the need to improve conflict resolution, including face-to-face encounters with illegal fishers. We advised that the FCZ committees should work together to solve problems that they cannot address alone. Now that the enforcement teams have some experience interacting with illegal fisherman, we hope this will help them address similar situations in the future.

While the communities reported that the project provided good field equipment for enforcement team patrolling, they expressed the need for a faster boat and engine to help keep up with the illegal fishers, who often use high-speed boats. Participants also requested additional financial support for the project in the future, especially to monitor activities in the FCZ after the project transition. All agreed that by the end of the project, residents in the two project districts (Xayabouri and Nan districts) had good knowledge about the FCZ regulations, and were aware that strong enforcement teams were in place. We believe the three villages have built a strong sense of solidarity and ownership to protect their natural resources from outsiders, and the use of illegal fishing gear in the area has declined.

The workshop concluded with a baci ceremony, which are often performed to mark happy events or big life changes, such as weddings, going to study overseas, welcoming guests, birthdays, moving to the new house, and the arrival of new babies. All participants sat around a tiered bowl called a phakhuane, which is made from banana leaves with white cotton strings hanging from the branches, and is decorated with flowers and a candle on top. The phakhuane is filled with offerings, including boiled chicken, Lao whiskey, money, flowers, sweets and other objects. Chants are recited in Lao and Pali that convey a special greeting to the honored guests, and the wish was made for all the participants have good health, happiness, and prosperity, as well as a wish for the success of the project in the future.