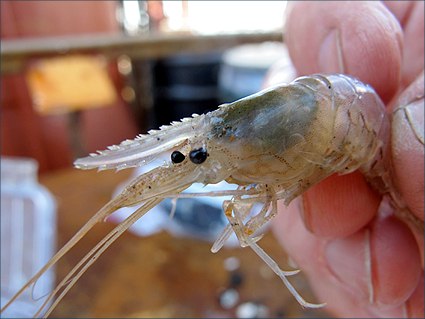 Sometime during the early 1950s, just after US involvement in the Korean War, a stealth invader crept on to a ship in Korea or Japan to make the long transpacific voyage to the US in the ballast water. At least that is the most likely hypothesis for the invasion of Palaemon macrodactylus (also known as the East Asian shrimp, the Pacific shrimp or the Oriental shrimp). The species was first discovered in the San Francisco Bay in 1957, but was likely introduced around 1954 due to increased military and cargo traffic between the West Coast of the US and Japan and Korea (Carlton 1979). In the 1970s it spread to Australia, and by the late 2000s had be detected in Argentina and Europe. Locally this species may compete with native species of the genus Crangon. The photo above highlights the large, serrated rostrum that is characteristic of both sexes of this species. While the function of the rostrum is not well understood it has been related to swimming behavior and in some species of shrimp it has been noted that males may use it in courtship behaviors (Sardà and M. Demestre 1989).