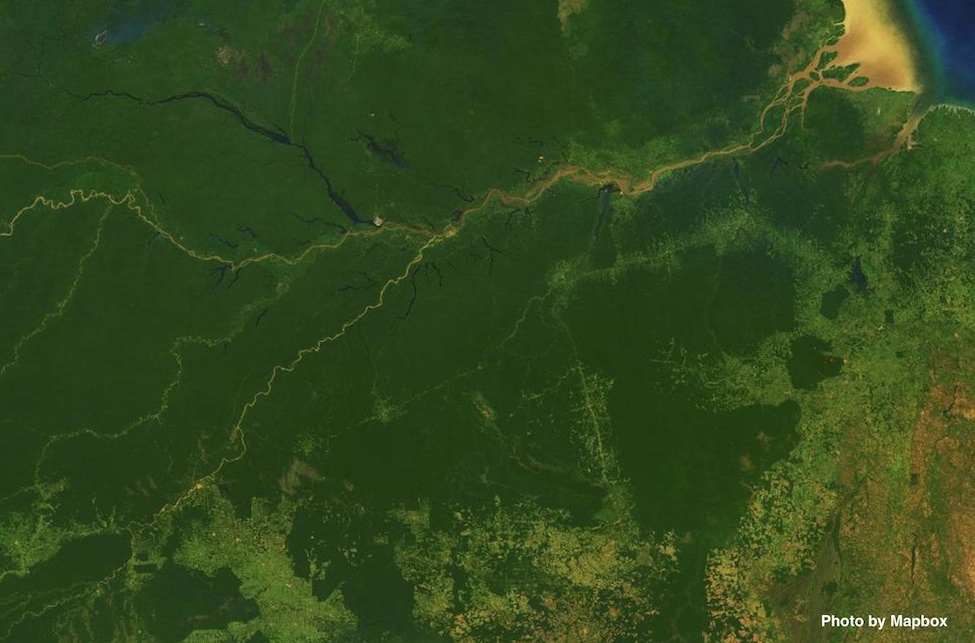 Think “coral reef,” and you likely picture a vibrant, colorful scene amid clear blue waters – not the muddy, silt-filled mouth of the largest river in the world. But that unlikely setting, where the mud-choked Amazon River meets the Atlantic Ocean (shown in the top right corner of the map above), is where a team of scientists recently discovered an extensive living reef. However, unlike the iconic coral gardens of Australia’s Great Barrier Reef, this Amazon reef is instead was thick with tubular and globular sponges, coral-like structures called rhodoliths, hydrocorals, and sea fans. When reporting the discovery in the journal Science earlier this year, the scientists described a patchy reef system of widely spaced clusters of sponge and rhodolith beds, which extends for about 1,000 km along the South American coastline at depths of 30-120 m (Moura et al. 2016).

Since it’s difficult to see anything in the muddy, swift-moving waters at the river mouth, the scientists used a dredge to dig up samples of the reef and bring them to the surface. Although not a hub of diversity like most tropical reefs, this newly discovered Amazon reef still boasts many animals. The scientists reported a whopping 61 species of sponges, some of which were quite large. They also documented 73 species of fish, and noted that intensive small-scale red snapper and spiny lobster fisheries are present in the region, suggesting that the reef provides an important nursery ground for these animals. Much of the reef life is able to persist in swift currents with little light, oxygen, or photosynthesis: sponges filter their food out of the water, and the researchers documented many microbes that can harvest energy from chemicals instead of light, as well as bacteria that can survive without oxygen.

The reef’s location is so improbable because the Amazon River discharges a massive amount of freshwater and sediment into the area every day – representing about 20 percent of all river discharge worldwide. When the freshwater hits the ocean, it forms a large, shallow plume that flows north toward the Caribbean. The researchers found that the water moves quickly enough that the sediment doesn’t always reach the ocean floor, allowing the reef some breathing room. As the runoff and currents shift with the seasons, some light is also able to penetrate to the reef community. The discovery proves that reefs can survive under a wider range of conditions than previously thought. However, the scientists report this unique ecosystem is threatened by oil and gas exploration planned for the region – let’s hope the reef’s new-found celebrity will help offer it some protection.