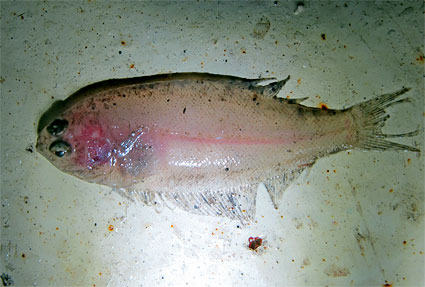 People can be right handed or left handed and some fish have been shown to use their right or left side more often, however flatfishes are the most extreme. The flat fish above was collected during dredging operations in the San Francisco Bay. At birth this flat fish had a symmetrical face like any other fish, with one eye on each side of it’s head. However, as the larva developed, the eye on the side of the body that would eventually face downward began to move, or ‘migrate’, to the upper side of the body while the mouth began to twist to enable the fish to feed on the bottom. The top side turned a mottled brown color to match the ocean floor and the bottom side became white. Most species of flat fish always have the eyes on the left side of the body (i.e. sanddabs) or the right side (i.e. soles); however, some species such as California Halibut (Paralichthys californicus) can have either depending on how they develop. While this peculiar adaptation has not stopped humans from consuming these fish in vast quantities; it has caused many fish and evolutionary biologists, including Charles Darwin, to scratch their heads in wonder. A few years ago part of the puzzle was solved when fossils of an extinct genus of flatfish were found that had an intermediate condition where the eye did not fully migrate, demonstrating a gradual evolution of this prominent characteristic (Friedman 2008).