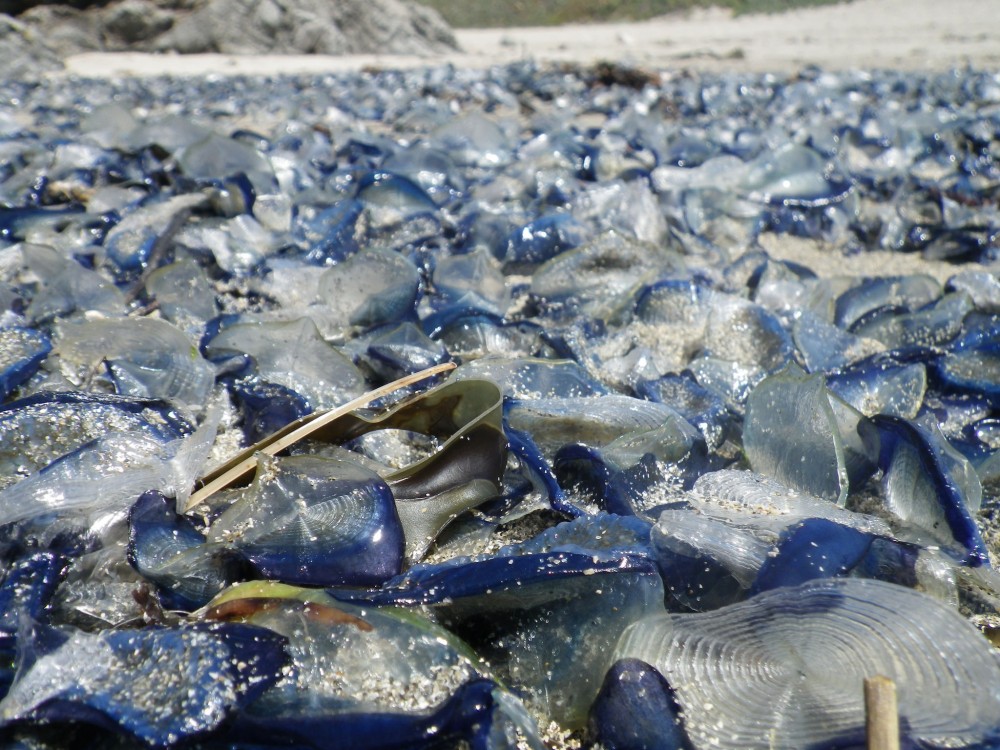 Earlier this summer, some California beaches were carpeted in red, thanks to masses of pelagic red crabs, while others were blanketed in blue. The West Coast was hit by waves of marine animals known as by-the-wind sailors (Velella velella). One of our biologists visited Fort Bragg, California, and found a beach awash with the jellylike creatures shown above. While by-the-wind sailors are not true “jellyfish” (Class Scyphozoa), they are close relatives known as hydrozoans (Class Hydrozoa). Each little sailor is actually a colony of individual polyps, which are either all male or all female, and serve different functions, such as feeding, reproduction and defense. Another famous hydrozoan colony is the Portuguese man o’war, which packs a powerful sting. As their name implies, these by-the-wind sailors are at the mercy of the winds: each colony has a stiff sail that helps propel it across the open ocean. However, if the wind shifts, these voyagers sailors can be blown on shore without any recourse.

Masses of the jellies made landfall on the beaches of Washington and Oregon this summer, then made an appearance in California, creating some spectacular electric blue pileups. Scientists say such mass standings happen regularly, about every three to six years. At sea, Velella velella provide food for a number of other animals, including sea slugs and the ocean sunfish (Mola mola). However, they’re probably much less appetizing to terrestrial animals. The jellies do have stinging cells in their tiny tentacles that hang in the water, which they use to catch plankton and small fish. Those stinging cells probably won’t feel like anything to the human hand, but may hurt if you were to rub your eyes. It’s might be best to let these animals be if you see them, and let them end their journey in peace.