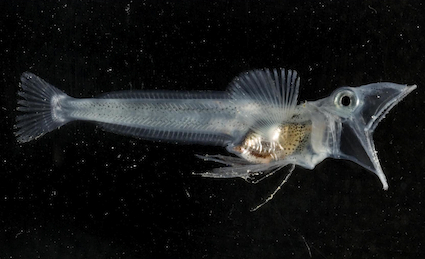 Although not popular with sport-fishermen yet, when it comes to a truly large gape, the icefish (Chaenocephalus aceratus) appears to dominate.

This and other photographs of unique species were recently released by the British Antarctic Survey, an international research team evaluating potential changes in Arctic ocean temperatures on species distribution and abundance.

Icefish, an abundant marine fish in Antarctica, have chemicals in their blood to prevent freezing and allow them to tolerate water temperatures down to 1 degree Celsius. A recent study indicates icefish grow rapidly, reaching almost 20 inches in length within five years, about the age at which they first reproduce. Their diet is variable and includes zooplankton, mysids, krill, and fish.