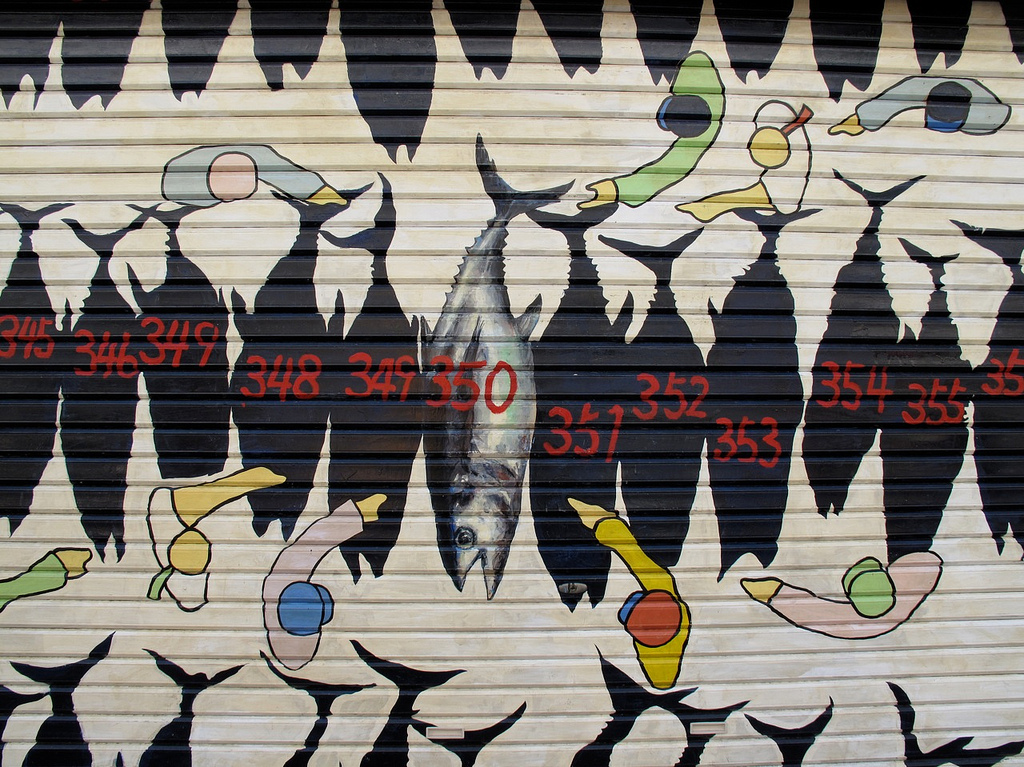 The largest-ever discharge of radionuclides into the ocean from Japan’s Fukushima Daiichi nuclear reactor meltdown in 2011 prompted many health concerns. However, as we described in our previous Fish Report, there is no great danger posed by Fukushima radioactivity in seawater because the material is now greatly diluted in the naturally radioactive ocean (see Swimming in a radioactive sea). But should we be worried about the levels of radiation in fish living in that seawater, which might end up on our plates? The short answer is no. Scientists are studying how radioactivity makes its way up the food chain, and although they have identified trace amounts of Fukushima radiation in fish like Pacific bluefin tuna (Thunnus orientalis), the levels are much lower than levels of naturally occurring radiation in the fish, and don’t raise any red flags. Instead, these traces of Fukushima radiation are more of a useful tool that helps track how the fish move across the ocean. As with reports of radioactivity in seawater, context is key.

The Japanese government found that levels of radiation in bottom-dwelling fishes near the site of the disaster exceeded Japan’s stringent seafood safety limits, and closed those fisheries while it continues to monitor radioactivity (Buesseler 2012). However, people are also concerned about fish that have the ability to transport radiation from Japan to the United States, such as the Pacific bluefin tuna. These tuna reproduce in the western Pacific near Japan, and some of the young fish migrate across the ocean to the California Current ecosystem off the West Coast of the United States. Scientists from Stanford University and Stony Brook University found that the concentration of radioactive cesium in bluefin tuna caught off California in 2011 was ten times higher than in fish caught before the accident, and the fish clearly contained radiocesium from Fukushima (Madigan et al. 2012). However, this level was still more than ten times lower than the safety limit in Japan, and about thirty times lower the concentration of the naturally occurring radionuclide potassium-40 found in the fish.

Although the scientists did not find the levels of radiation in the tuna concerning, many news outlets seized on the topic and sounded the alarm. So the scientists and additional colleagues calculated the human dose of radiation from the fish for some perspective. They found that the dose of radiation humans would experience from Fukushima-derived radionuclide in the tuna was 1,000 to 10,000 times lower than the dose from the naturally occurring radionuclide polonium-210 present in the fish (Fisher et al. 2013). The authors note that the additional dose of radionuclides from Fukushima in these fish would be less than or similar to radionuclides humans are exposed to through everyday occurrences, including other food sources, X-rays, and air travel. For example, if a subsistence fisherman ate 124 kg of these California-caught tuna a year (which is about five times the average seafood consumption of United States residents), and if all of this tuna contained the amount of Fukushima radiation detected in this study, the total dose of radiation would be similar to receiving a dental X-ray, resulting in a 0.00002% increased probability of developing fatal cancer (Fisher et al. 2013). Clearly, the perceived risk that people associate with eating these fish is much greater than the actual risk.

Another tuna species that makes regular migrations across the Pacific Ocean is the Pacific albacore (Thunnus alalunga). Scientists from Oregon State University and the National Oceanic and Atmospheric Administration tested albacore caught off the coast of Oregon and Washington both before and after the Fukushima disaster. While they did detect radiocesium from Fukushima in the fish after the disaster, the authors reported that the amount was 0.1% of the level of concern set by the U.S. Food and Drug Administration (FDA) for this element (Neville et al. 2014). While headlines announced that the radiation level had “tripled” in tuna, there was so little to start with that increasing by a factor of three barely produced a change. Unlike mercury, which poses a serious health risk to people because it accumulates in animals as it travels up the food chain, cesium does not become concentrated in such a dramatic manner; instead, it is regularly flushed out of fish tissues as they balance their salt concentrations with the surrounding seawater (Buesseler 2012). As a result of these and other studies, the U.S. FDA reports that there is no reason for public concern about health risks from Fukushima radionuclides in seafood. While there are many aspects of seafood that consumers should be concerned about, including mercury, sustainability, and human rights, radiation is not high on that list.