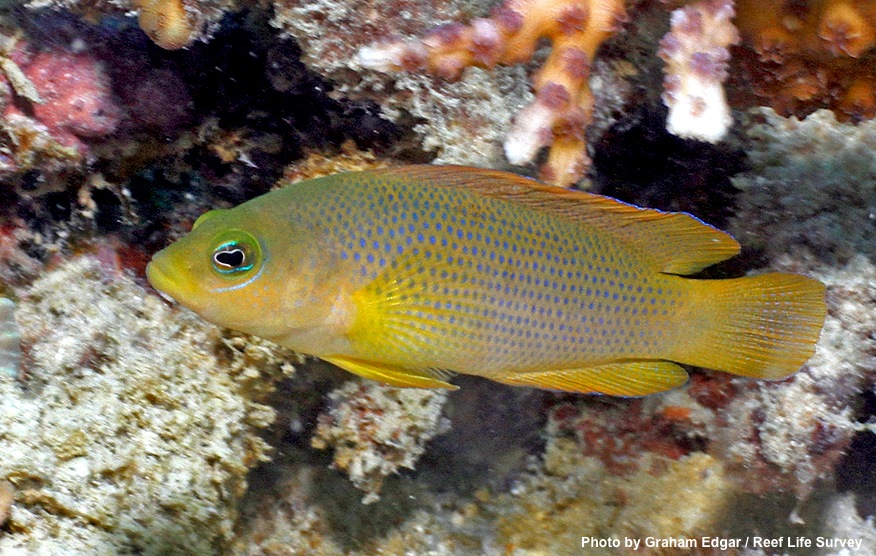 Blending in is key to the success of the dusky dottyback (Pseudochromis fuscus), a coral reef fish from the south-west Pacific and eastern Indian ocean. The sneaky fish can camouflage itself to hide from predators, and even changes colors to match its prey, luring them into a false sense of security before eating them. In a recent paper in Current Biology, an international team of researchers says the dottyback is the first animal known to morph between different guises to deceive different species. They compared the fish to the ‘wolf in sheep’s clothing’ from Aesop’s Fables, in which a wolf dons the skin of a sheep to hide from the shepherd while preying on the flock.

The scientists conducted a series of experiments to uncover various aspects of the dottyback’s color-changing trickery. They began with a field experiment at Lizard Island in Australia, where two colormorphs of the dottyback are found (yellow fish are found at live coral sites, and brown fish are found at coral rubble sites). In this region, dottybacks prey on two colormorphs of damselfish, also yellow and brown. The researchers built reef outcrops, some made of live coral and others made of rubble, and populated them with yellow and brown damselfish. They released brown and yellow dottybacks into the reefs with damselfish of the opposite color. After two weeks, the dottybacks had switched color to match the color of the damselfish.

Next, the scientists took their research to the laboratory. They suspected the color changes improved the dottybacks’ hunting success, and wanted to confirm their hypothesis. They divided brown and yellow dottybacks into tanks with both matching and opposite colored damselfish. They found that dottybacks in tanks with damselfish of the same color were three times more likely to capture juveniles than those of opposite colors. The results indicated that the juvenile damselfish might have reduced their vigilance against predators when they couldn’t distinguish between adult damselfish and dottybacks.

The scientists also wondered if the dottybacks’ color-changing abilities granted them extra protection against predators, so they conducted tank experiments in which coral trout were trained to strike at images of different colored dottybacks for a food reward. The images were placed against randomly chosen live coral or coral rubble backgrounds. When the dottyback’s color matched the surrounding habitat (yellow for live coral or brown for coral rubble), the coral trout were much less likely to strike. The results led the scientists to believe that the color-change also gives the dottyback the advantage of camouflage against predators as well as its prey (Cortesi et al. 2015). What Aesop didn’t realize when he penned his famous tale was that a wolf in sheep’s clothing already existed in nature, in the form of color-morphing reef fish.