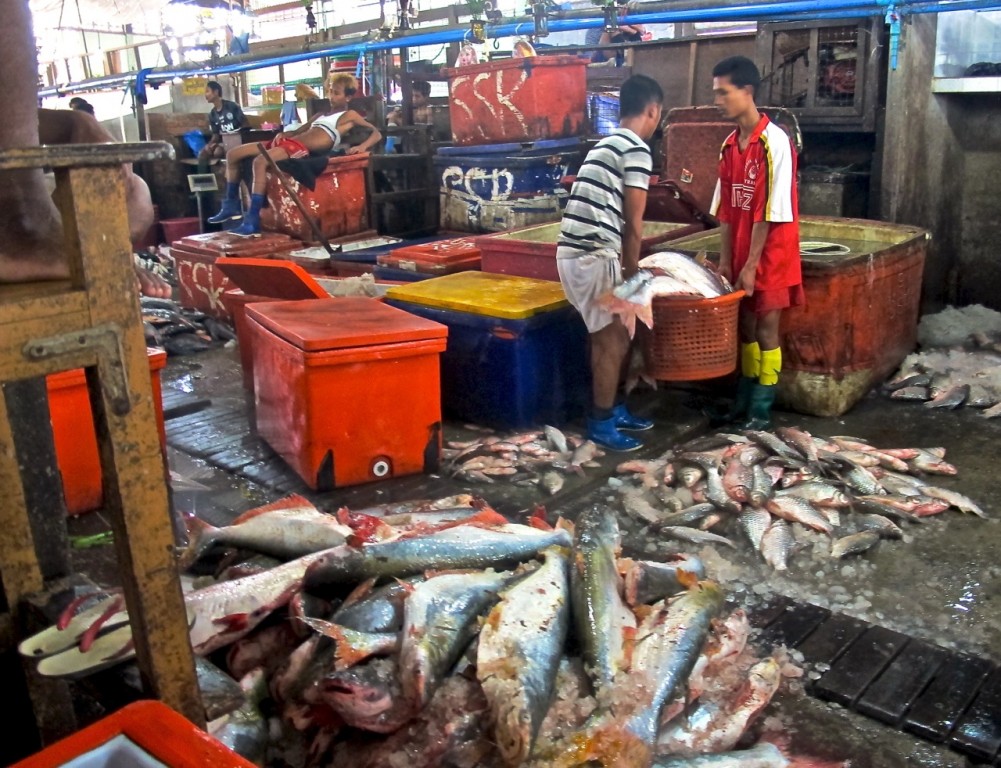 As World Food Day approaches on October 16, we wanted to shine a spotlight on the subject of fish as food, particularly on the issue of human rights abuses in the seafood industry that has captured global attention. While our staff were in Hawaii attending the IUCN World Conservation Congress earlier this year, we saw this story by the Associated Press on the front page of the local paper that documented seafood slavery amid Hawaii’s own fishing fleet, demonstrating that this issue hits close to home. Given its continued relevance, on today’s Flashback Friday we wanted to revisit this post on the topic of slavery and seafood.

From fair trade coffee to sweatshop-free clothing, consumers have become familiar with issues of human rights intertwined in their daily purchases. But what about slavery-free seafood? Slavery in the modern world takes many forms, including the forced labor of men, women, and children aboard fishing boats and in seafood processing facilities around the world. A white paper released by FishWise, a nonprofit sustainable seafood consultancy, digs into the issue of human rights violations in the seafood industry, and notes that this ethical concern is often interlinked with issues of environmental sustainability. Many violations of both kinds occur on vessels fishing illegally, providing opportunities to address forced labor and overfishing at the same time.

The paper reviews reports covering human trafficking and forced labor in the seafood industry, and notes a prominent focus on countries in Southeast Asia. In particular, abuses are commonly reported from Thai-owned fishing vessels and Thai shrimp peeling and processing plants. Reports abound of dangerous working conditions, 20-hour workdays, and abuse of all kinds. Some 90% of the workers in Thailand’s seafood processing industry are migrants from neighboring Myanmar, Cambodia, and Lao PDR (Accenture 2013). Many are the victims of trafficking and abuse (as reported in this video), though the actual number is difficult to quantify. Men and boys are often made to work onboard fishing vessels, while women and girls are forced to work in seafood processing facilities. Migrants may be lured to Thailand by recruiters with promises of good jobs, only to later have their passports confiscated and be forced to work in inhumane conditions without pay.

As fish stocks have declined in many parts of the world such as Thailand, vessels tend to fish for longer time periods and further away from shore. This puts fishers at risk of abuse far from the reach of authorities – who may even be corrupt or complicit in the abuse. The global nature of the seafood industry also presents challenges in addressing the problem. Fish are shipped great distances from where they were caught, often traveling from regions in the developing world to the developed world. Traceability is therefore a key issue in solving both environmental and human rights problems in the seafood industry. This requires identifying every link in the seafood supply chain to understand how a fish traveled from a fishing boat to a frying pan. Traceability efforts can also combat seafood mislabeling and fraud by essentially helping a consumer answer the question: where did your seafood come from?

Another solution suggested in the report to combat illegal fishing would be to implement Unique Vessel Identifiers (UVIs) on fishing vessels. This number would stay with a vessel and would be linked to records of its ownership, history, and fishing authorizations, thus helping to track boats with a history of offenses. Companies can also create policies on human rights, and conduct risk assessments (as described in this video) for human rights violations at the same time as conducting risk assessments for illegal fishing or seafood mislabeling. Once products from illegal sources are identified, work can be done to eliminate these sources from the supply chain. Fishery improvement projects are another strategy that put forth actions to improve the environmental and social aspects of a fishery in a specific community. Finally, telling the success stories behind the brands and products that have worked to improve their labor and environmental practices can promote awareness and momentum for further positive change. All these efforts contribute toward making fishing a safer, fairer, and more sustainable industry.