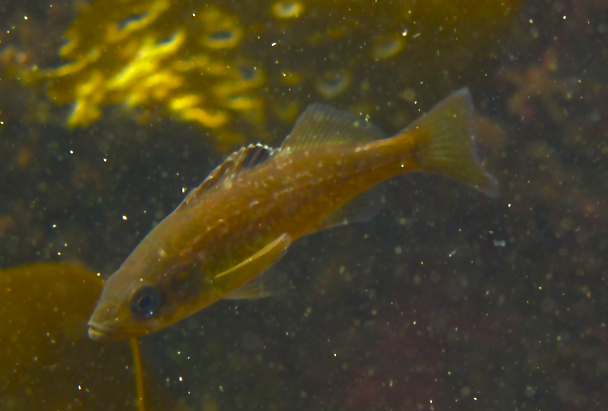 Nearshore kelp beds along California’s coast don’t only make for spectacular diving, they are also a crucial component to sustaining many populations of fish and invertebrates, including important contributors to the state’s commercial and recreational groundfish fishery. For example, juvenile rockfish (Sebastes spp.) seek out kelp beds for cover and food. However, for a baby rockfish, the journey to this refuge isn’t always easy.

The saga begins when rockfish mothers release their offspring into the water through a process called parturition (Haldorson & Love 1991). Unlike most fishes, rockfish eggs develop internally, and the mothers bear live young. Only millimeters in length, the tiny rockfish larvae drift with the current and get transported offshore by the seasonal and variable currents associated with spring upwelling. Oil globules in their bodies provide buoyancy and nutrition for some time, and those that have by chance avoided predators thus far are soon able to swim in short bursts for a few inches. Nutrient rich water from the deep ocean drives the food web, creating phytoplankton blooms that attract small invertebrates, which in turn can fill the little rockfish stomachs – if the timing is right!

For rockfish that are born early in the upwelling season, their environment may be largely devoid of nourishment, as the ephemeral food web has not had sufficient time to establish itself. However, those that are born too late could be limited by the availability of suitably sized prey, as most prey organisms have simply grown too large to engulf. For those that find enough food while avoiding becoming food, it eventually becomes time to leave the open ocean environment after several weeks or months. Having grown to an inch or two in length, the young fish often seek out shallow water nurseries that provide suitable shelter and food resources, such as kelp beds. If upwelling is strong, the tiny fish may have been transported too far away from shore to reach a nursery ground. Conversely, if upwelling is weak, larvae are transported shorter distances, but the dampened supply of deep-sea nutrients can make finding enough food even more problematic (Moser & Boelhert 1990).

While it may seem like juvenile rockfish just can’t catch a break, and the vast majority of young rockfish succumb to starvation or predation, a number of interesting reproductive strategies stack the odds in favor of rockfish population persistence. Adaptations including producing live young over an extended period of time (to increase the probability that some larvae are released under suitable conditions), having large numbers of offspring (hundreds of thousands), and a long adult life expectancy (which offers many chances at successful reproduction) generally ensure that some individuals reach reproductive age and propagate the cycle (Wyllie Echeverria 1987).

Many variations on this general process exist among the approximately 100 rockfish species – yet all of them must cope with very high mortality rates during the early larval stages. The juvenile rockfish pictured here are truly off to a lucky start, having so far beaten the odds and made it safely to their “kelp kindergarten” on northern California’s rocky shore. In a number of years, some of them may just get a chance to release offspring of their own to survive at the whim of the ocean’s currents. 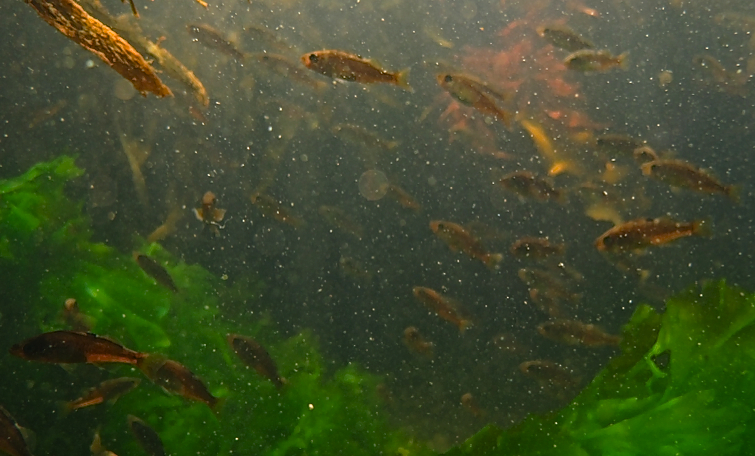