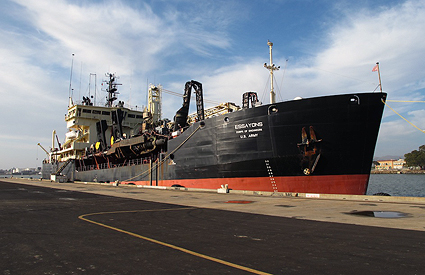 The Essayons, which is roughly translated as “let us try” in French, was home for a week to dredge the San Francisco Bay channel to maintain boat passage into the bay. The vessel is a 100 million dollar hopper dredge that pumps silt and sand from the ocean and bay floors, stores it onboard, and transports and places it in a disposal area. The Essayons operates all along the West Coast with a crew of 22. She can pick up 600 dump truck loads of sand from the ocean floor in an hour. The dredged materials collected in the San Francisco Bay are being used to build an offshore sandbar to prevent erosion and improve conditions at Ocean Beach.

During dredging, FISHBIO staff helped the U.S. Army Corps of Engineers to evaluate the potential impacts of dredging on Delta fish, especially longfin smelt (Spirinchus thaleichthys). The concern is that longfin smelt and other species may be entrained into the dredge at the beginning and end of each dredging period, when the dredge-arm is pumping up to 35,000 gallons per minute and operating just above the substrate. Longfin smelt, similar to salmon and steelhead, are an anadromous fish species, meaning they spend the majority of their life in salt or brackish water and migrate into freshwater to spawn. Longfin smelt are found in California’s marine and brackish waters as far north as the Oregon border and are listed as threatened under the California Endangered Species Act.