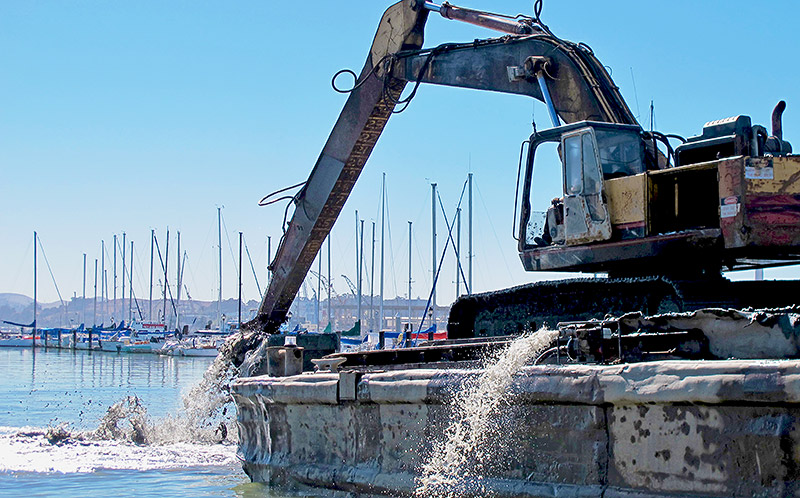 The City of Vallejo recently began a dredging project slated to remove approximately 500,000 cubic yards of sediment from the Vallejo Marina over the next 10 years in order to return the Marina to the originally permitted depths for safe navigation. The Vallejo Marina is adjacent the Mare Island Strait, which connects the Napa River to Suisun Bay and thus San Pablo Bay, a northern extension of the San Francisco Bay/Sacramento-San Joaquin River Delta estuary system (Bay-Delta estuary). The work is well timed, since the America’s Cup next summer will likely draw many boaters to the marina, which has been at limited capacity.

Although no permanent detrimental effects such as undesired substrate alteration, decreased water quality, or loss of fish habitat are anticipated due to the dredging, during the permitting process , consultation with the U.S. Fish and Wildlife Service under Section 7 of the Endangered Species Act determined that the federally-listed Delta smelt (Hypomesus transpacificus) and its critical habitat, were present at or in the vicinity of the project location, and may be affected by the project. Delta smelt were listed as threatened in 1993 and critical habitat was designated the following year. The Bay-Delta estuary and specifically the Napa River provide important habitat to several species protected under the federal and state Endangered Species Acts, including Delta smelt. As such, a qualified biologist is required to be present for biological monitoring while dredging is occurring, and FISHBIO staff assisted with these efforts.

Delta smelt are a relatively small, slender, silvery fish native to the upper Sacramento-San Joaquin estuary.  They occur below Isleton on the Sacramento River, below Mossdale on the San Joaquin River and in the Suisun Bay. Spawning can occur in the Napa River and San Pablo Bay. There are a number of stressors believed to affect the Delta smelt including introduced competitors such as silversides, agricultural discharges, habitat loss, and water diversions at state and federal pumps. However, after a decade of declining abundance, the results of last year’s Fall Midwater Trawl Survey (FMWT) indicate that the Delta smelt population might finally be showing signs of improvement.