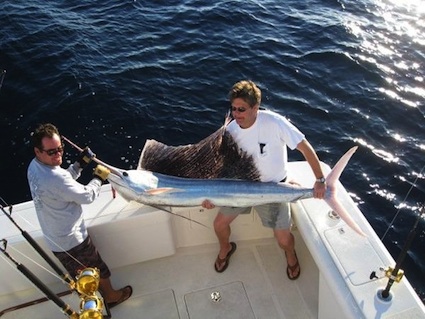 As we’ve noted in previous posts on the black and white Chinook salmon and the odd-shaped juvenile hatchery Chinook, deformed or discolored fish don’t usually survive to adulthood. Deformities reduce swimming capability and and discolorations attract attention, both conditions significantly increase predation risks on juvenile fish. This white sailfish caught last week off the coast of Cabo is a rare example of an albino fish that survived to adulthood.

Sailfish are widely distributed in the temperate and tropical regions of the worlds oceans, preferring temperatures roughly between 70 and 83 F. It’s upper jaw (i.e. bill) is used to stun and harm larger prey. Because full grown sailfish are considered apex predators they don’t have too many threats, but when they do feel threatened they use their dorsal fin (i.e. sail) to intimidate others.