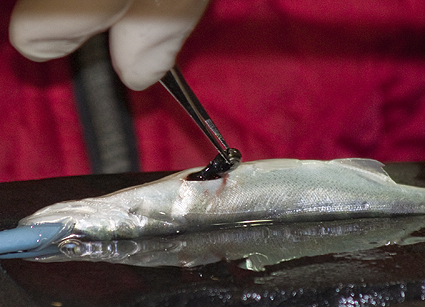 As fish populations along the West Coast continue to decline and our thirst for water continues to increase, more and more people are becoming aware of the billions of dollars being spent every year on fisheries research and restoration in California, Oregon, and Washington. For example, this juvenile Chinook salmon is being inserted with a $400 acoustic tag. Although one four-hundred dollar tag may seem rather insignificant, multiply this by the thousand tags needed for this experiment, add the hundreds of thousands of dollars worth of high-tech tracking equipment and boats needed to follow the fish through the complex Delta maze, and add the salaries of dozens of researchers needed year-round to plan and implement the month-long field study, and you start to get an idea of why one salmon survival study can easily cost over a million dollars – and the extent to which the USA is willing to invest to protect its fishery resources and water supplies.

For FISHBIO staff who have recently been spending time in the Southeast Asian nation of Lao PDR to evaluate the fisheries of the Mekong River Basin, this $400 tag represents a stark contrast to the financial resources and working conditions of fisheries researchers in parts of the world with developing economies. For instance, consider that $400 dollars is more than the average income one Lao person earns in an entire year. It is ironic that in a region where the majority of the human population relies on independently harvested wild fish protein for their daily sustenance, so little money has been spent or is available to study the resource that feeds its inhabitants. Whereas, in the USA, one million dollars funds one year in a multi-year evaluation in only one small area of the West Coast, in the Mekong Basin one million dollars could fund over a decade of research on the diversity, abundance, and life histories of fish species that represent a primary food source for over 60 million people.