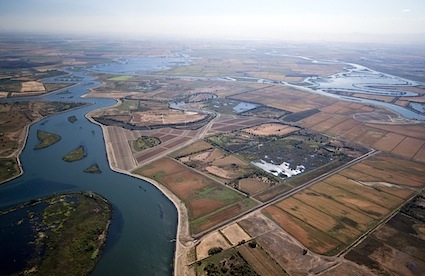 Last week FISHBIO attended the Delta Multiple Stressors Workshop in Sacramento, CA. The workshop was held by the Delta Independent Science Board in response to requests by members of the California Senate and Assembly for a list and assessment of Delta stressors. At first glance creating a list of “stressors” may not seem difficult, but it quickly became apparent that this was not the case. While every researcher, law maker and citizen of Northern California has an opinion on what the main “stressors” are to the health of the Delta ecosystem and the reliability of the water supply (the co-equal goals of Delta Stewardship Council), the catch is listing them in an appropriate manner. First, it became clear that even among Delta researchers there is confusion over whether the terms “stressor”, “threat”, “pressure” and “driver” are analogous or interrelated. Secondly, it was evident that the appeal came from a the lawmakers’ desire to rank the stressors by importance. However, to rank something by importance you need a clear idea of the purpose of the ranking – is it ecosystem triage? Water distribution? Cost allocation? Much of the day was spent in a long discussion of how to categorize stressors, criteria for a potential ranking system, and the general merits of ranking stressors.

Another issue is that by simply listing stressors, it appears that ‘all stressors are created equal’, when this is clearly not the case. Stressors vary over time and space; dredging has relatively short term and localized effects, while sea level rise will have long term effects on the entire system. Thus, in order to make the list meaningful, you need to connect stressors and measurable goals to the appropriate spatial and temporal scale. Suddenly, the list is beginning to look like an Amtrak timetable.

Last, but definitely not the least of the ISB’s concerns is that many of these stressors are related and cannot be treated or assessed separately. For example, the average salinity in the Delta has changed over time due to the decline in Delta outflows, and the food web has changed due to the introduction of non-native species. How do you describe these relationships on paper? There were various examples shown of complex flow charts that make your head spin, which one researcher referred to as a plate of ‘spaghetti and meatballs’ (big circle text boxes linked by squiggly lines). It seems that the ISB’s task for the next few weeks will be to merge the ‘Amtrak timetable’ with the ‘spaghetti and meatballs’ into something comprehensible for the Senate, Assembly and general public. As one Delta researcher put it, no matter what you call them, these “stressors” are really stressing people out.

The memo is slated for release to the public January 27th.