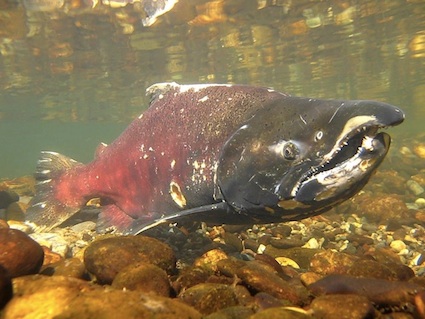 Winter means the end of fall-run Chinook salmon escapement along the Pacific coast. Although some fish are still trickling in, this year salmon returns are variable throughout their range. Chinook returns to Columbia Basin streams in Oregon and Washington are estimated to be about 425,000 fish, an increase of about 14% (71,000) over 2008.

So far only about 1,400 have Chinook returned to California’s San Joaquin Basin, a decrease of about 1,000 fish from 2008. Stanislaus River returns are about the same as in 2008, but Tuolumne and Merced escapement is down from last year.

Escapement has not been reported for the Sacramento Basin yet, but the U.S. Fish and Wildlife service is only expecting about 8,000 fall-run Chinook to return to Battle Creek, roughly a 40% decrease from 2008. We don’t have final Chinook counts on the Feather River yet, but in November escapement was nearing 10,000 fish, almost double the 5,238 returning in 2008.

This post-spawning male was photographed a few days ago showing well defined secondary sexual characteristics in the form of a large kype, teeth, and red coloration. He has completed his 4 year life-cycle and will die within a week or two. The circular wound above his pectoral fin appears to be an old lamprey scar.