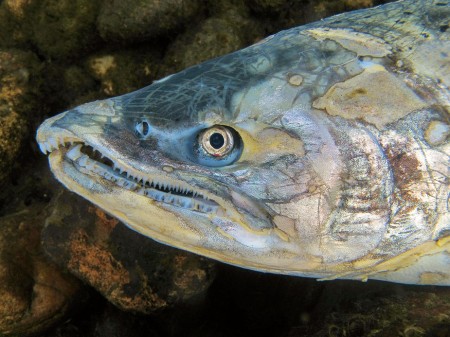 Preliminary estimates of adult fall-run Chinook salmon escapement (that is, the number of adults returning to spawn) in the Central Valley in 2010 have been posted in the “GrandTab” by the California Department of Fish and Game. A summary table is provided below.

The number of Sacramento River fall-run Chinook salmon (SRFC) is 152,831 and for the San Joaquin River basin is 10,350. Although numbers are up from previous years, SRFC numbers are still below the 2010 conservation objective of 180,000 recommended by the Pacific Fishery Management Council, and adult returns are likely to be lower in 2011 considering that the number of parents and associated juvenile production contributing to adult returns in 2011 will be substantially less than 2010. In fact, the 2011 SRFC escapement will be comprised of adults produced from the three lowest adult return years on record for SRFC – 2007, 2008, and 2009. As such, the parental stock (brood years 2007, 2008, and 2009) for adult fish returning to spawn in 2011 is 212,089, which is 52.3% less than the parental stock abundance for 2010 escapement. 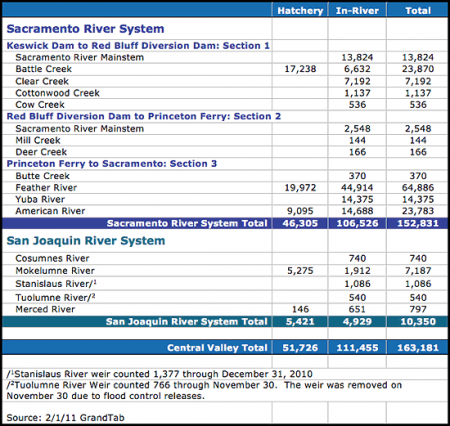 Additionally, abundance is only part of the story because the “GrandTab” only provides the numbers of fish observed in each location, not their origins. That is, the numbers reported for “Hatcheries” in the “GrandTab” are the number of salmon entering the hatcheries to spawn (which may consist of both hatchery-origin and natural-origin fish) and the numbers reported for “In-river” are the estimated number of salmon spawning in the rivers (which also may consist of both hatchery-origin and natural-origin fish). In 2010, a considerable portion of adult in-river returns was likely composed of hatchery-origin salmon, particularly in San Joaquin Basin tributaries where increased numbers of ad-clipped fish were observed at the Stanislaus River weir (24.7% as of 12/6/10) and the Tuolumne River weir (29.0% as of 11/30/10) (See FISHBIO Update 2 for more details). Most ad-clipped fish are of hatchery origin. Since neither of these two tributaries have hatcheries and no ad-clipped fish have been released into them since 2006, the observed numbers of marked fish indicates that a tremendous amount of straying has occurred, and that hatchery fish probably make up a much larger percentage of CV escapement than previously thought.