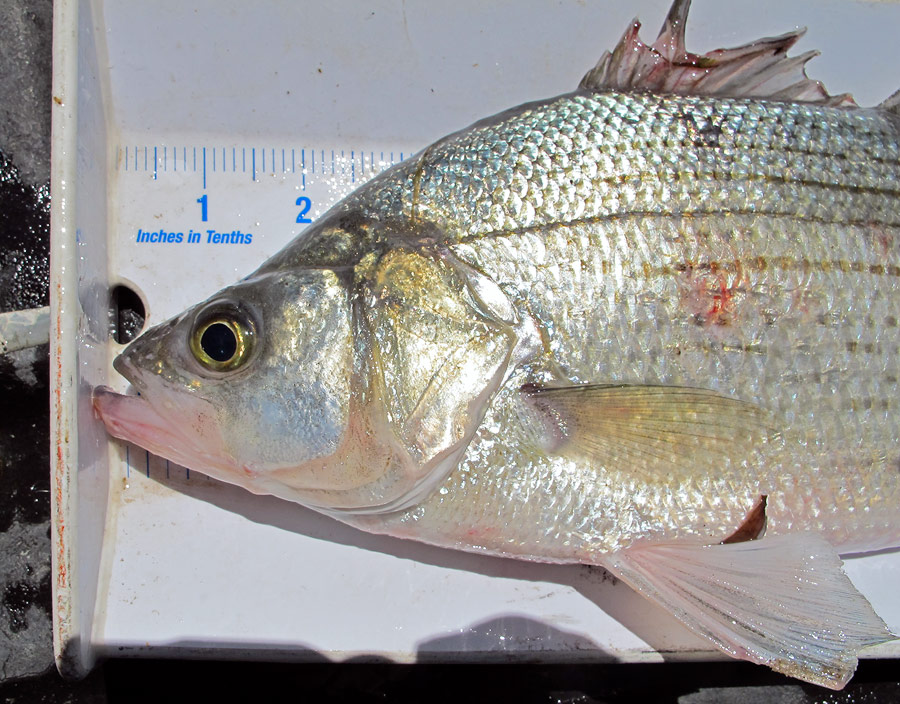 This white bass (Morone chrysops) is an unusual catch for a rotary screw trap in California, but because the trap is below Lake Nacimiento the odds are a little better. Lake Nacimiento, a reservoir in San Luis Obispo County, is home to one of the few established, reproducing populations of white bass in California. Native to the Great Lakes and Mississippi River basins, white bass have a contentious history in California.

After extensive debate in the 1950s and 60s white bass were introduced to Lake Nacimiento in 1965. They were stocked for sport fishing since fisheries managers expected they would thrive in the warm reservoir with abundant threadfin shad. White bass have been described as voracious pelagic predators that compete with striped bass and other piscivorous fishes. The concern was that if white bass became established in the Delta, they could damage the striped bass fishery. Thus, the Department of Fish and Game (DFG) restricted their introduction to the Lake Nacimiento, which lacks a connection to the Delta. After white bass were discovered in Lake Kaweah in 1977, where they were illegally introduced, there was concern for their potential impacts on salmon populations, should they reach the Sacramento-San Joaquin Delta. The state spent millions of dollars to chemically treat and successfully eradicate white bass from Lake Kaweah and the Tulare Lake basin. Small numbers of white bass have been found in Pine Flat Reservoir, but opponents contend that Pine Flat should not be treated unless Lake Nacimiento is also treated.

This specific bass was captured in a rotary screw trap approximately 10 river miles downstream of the Lake Nacimiento. Given the poor condition of the fish and the multiple abrasions and lacerations, we suspect that it went over the dam spillway this spring during high flows. The DFG has strict rules prohibiting the transport of live white bass, and they require that any white bass taken must be immediately killed, or if caught in Lake Nacimiento, returned to the reservoir. White bass in California can be taken all year and have no limit.