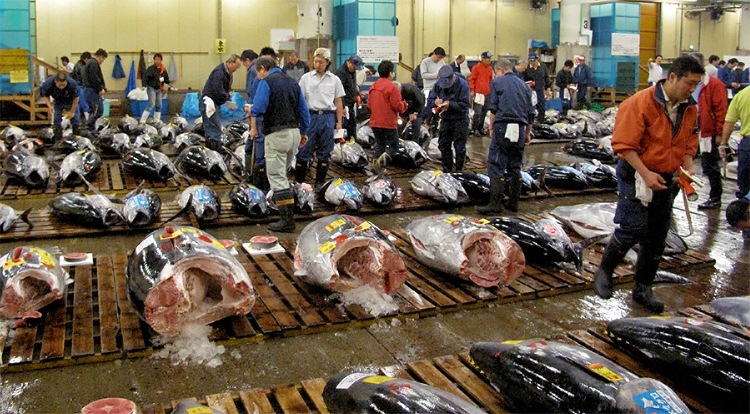 Bluefin tuna are prized for their flesh in Japanese markets and are used for making popular foods such as sushi and sashimi. In some Tokyo fish markets it is common for bluefin prices to range in the vicinity of $2,000 to $20,000 USD, but on January 5, 2012 at the Tsukiji fish market in Tokyo one bluefin tuna shocked the world by selling for a record $736,000 USD, breaking last years record of $396,000. An increase in the price of toro (belly fat portion of the fish) has prompted many in the fishing industry to cash in, resulting in the overfishing of bluefin and many other tuna stocks. The bluefin is a relatively long-lived fish and does not reach maturity until around five years old. Often bluefin are captured before reaching an age at which they are able to reproduce.

The Pacific bluefin tuna (the same tuna species that sold for a record amount in Japan) is considered to be fully exploited by the International Union for Conservation of Nature (IUCN), but has been classified as a species of least concern. The most recent Stock Assessment and Fishery Evaluation (SAFE) conducted by the Pacific Fishery Management Council (PFMC) estimates that the Pacific bluefin have fallen between 40% and 60% of the historic population. Today most of the bluefin fishing that occurs in the eastern Pacific is done in the form of tuna ranching in Mexican waters. Tuna ranching is a method of fattening the fish by herding them into a net and feeding them for several months until they are ready to take to the market. This method is not considered to be a sustainable solution because every pound of tuna that is processed requires 20 or more pounds of other fish for food (Trenor 2008). The majority of the Pacific Bluefin catch comes from the northern Pacific and waters around Japan using methods such as purse seines, trolling, longlines and set nets. As the equipment used for commercial fishing continues to evolve, there will be an increase in the fishing pressure posed by illegal, unregulated and unreported fishing (IUU) on tuna populations around the world. One study estimated that approximately $4 billion in revenue was created in black market bluefin between 1998 and 2007. It will become increasingly important to monitor the trends in the population in order to make proper management decisions, and more emphasis needs to be placed on reducing IUU fishing in order for management strategies to be effective.

The most recent  Status of Stocks Report released by the National Oceanic and Atmospheric Administration (NOAA) states that all bluefin tuna are at a risk of being over exploited and many, like the Southern bluefin tuna, have already been depleted due to overfishing. Yet in May of 2011, NOAA declined to protect the western Atlantic population of bluefin tuna under the Endangered Species Act. If the bluefin stocks are going to rebound, commercial fisheries are going to have to make greater cuts and international agencies must crack down on IUU fishing.