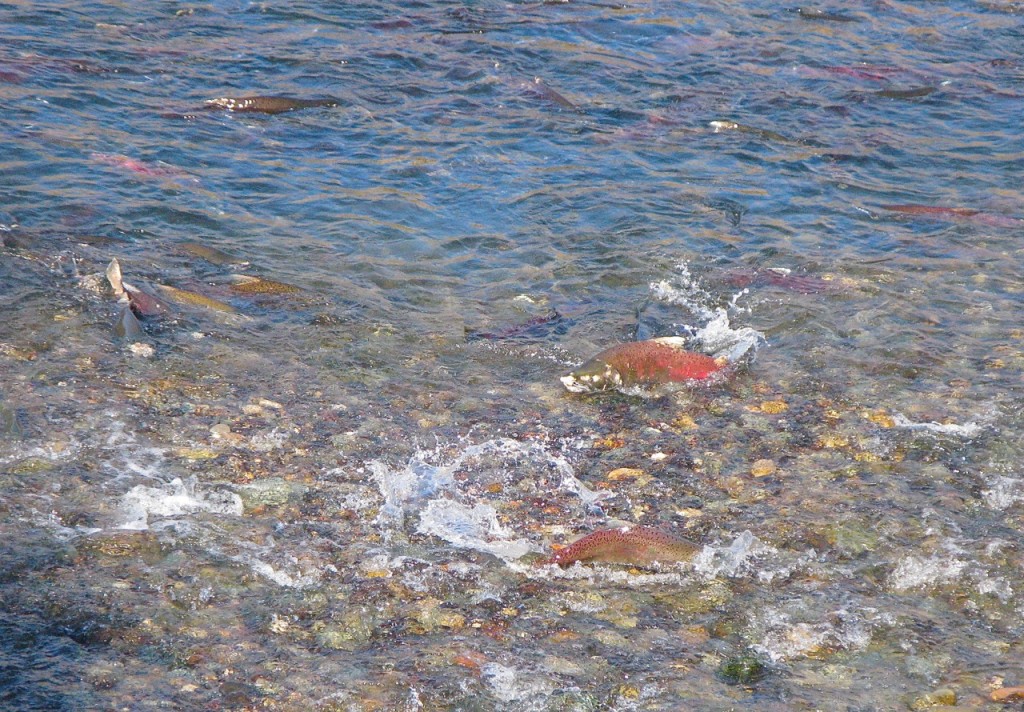 Across the West Coast, fall-run Chinook salmon migration is wrapping up and abundance estimates are being calculated. Most salmon abundance counts are calculated using carcass surveys to approximate the number of salmon in a watershed, but the disadvantage of this method is that escapement estimates are not available until after the migration period is complete. There are a few tributaries, however, that have adopted different techniques, such as video monitoring or the use of a Riverwatcher for enumerating fall-run Chinook salmon, that allow for real-time calculations. Using this information can provide more rapid insight into what salmon abundance looks like in 2013.

In the Sacramento River Basin, the U.S. Fish and Wildlife Service monitors fall-run Chinook salmon on Battle Creek with the use of video, and has the ability to enumerate Chinook salmon escapement on a semi-real-time basis. The 2013 Sacramento River Fall-run Chinook (SRFC) counts were predicted to be similar to those in 2012, and if Battle Creek is any indication, then 2013 was another good year. Through November 29, 93,527 Chinook salmon were counted migrating past the video station, which is down slightly from the 100,235 salmon observed in 2012.

The San Joaquin Basin could provide additional insight to the SRFC count because it is part of the California Delta and its trends are similar to SRFC stocks. East Bay Municipal Utilities District operates a video station in the fish ladder at Woodbridge Dam on the Mokelumne River. Thus far, 12,108 Chinook salmon have been counted passing upstream, similar to the 12,083 observed in 2012 prior to January 1. Farther south, the Tri-Dam Project funds the use of a Riverwatcher on the Stanislaus River and Turlock Irrigation District funds a Riverwatcher on the Tuolumne River. In 2013, there have been 5,391 Chinook salmon counted by the Riverwatcher on the Stanislaus River as of December 12, which is down from last year’s total of 7,132 salmon recorded prior to January 1. In contrast, 3,587 Chinook salmon have been counted in the Tuolumne River as of December 12, compared to 2,181 counted in 2012.

The Russian River is a coastal tributary that terminates north of the San Francisco Bay, and prior to the turn of the century not much was known about the abundance of Chinook salmon in the area. In 2012, escapement on the Russian River was the largest on record at 6,697; however, as of December 15 this year, only 2,716 Chinook salmon have been recorded at the Mirabel Inflatable Dam during the 2013 monitoring season.

A real-time calculation of fall-run Chinook salmon escapement is helpful for monitoring populations during the season. Preseason forecasts provided by the Pacific Fishery Management Council are the best management tool available today, but inaccuracies do occur in these estimates. Having the ability identify such variations will allow for in-season modifications to regulations. For example, if counts are unexpectedly low, then harvest numbers can be decreased, while in the event of an unexpected abundance, regulations could be relaxed to allow for more take by recreational anglers. It’s important to have up-to-date information to adjust regulations and minimize harvest impacts on salmon populations.