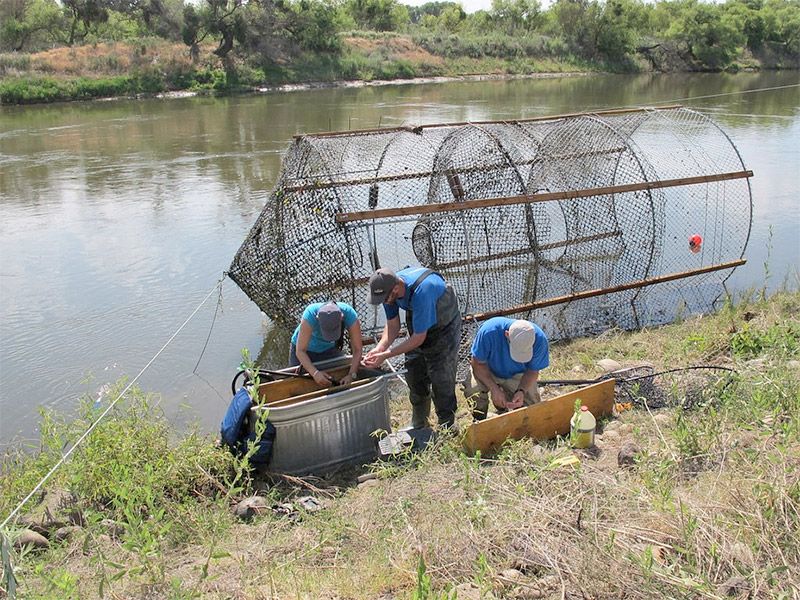 There are common questions that anglers and fish biologists often ask, such as What kinds of fish are found in this river? and How many are there? It’s often assumed that we have answered such basic questions long ago, but it’s not as easy as it sounds. Many factors can affect the abundance of fish species, including environmental factors like flow, temperature, and contaminants, or ecosystem factors like food supply and predator abundance. Recently, there has been growing interest in how many adult striped bass (Morone saxatilis) migrate into the San Joaquin River during their spring spawning migration.

Since 1969, the California Department of Fish and Wildlife  (DFW, formerly “Fish and Game”) has been conducting a mark-and- recapture study to monitor the population dynamics of Central Valley striped bass, focusing on the Sacramento River and the Delta (see DFW reports). The estimated population of legal-sized striped bass remained relatively stable early in the study, but then declined in the late 1970s and 80s (Kohlhorst 1999). In response, DFW began a hatchery stocking program, but discontinued it in 1991 due to concerns about predation on endangered salmonids (Harris and Kohlhorst 1996). DFW studies found a subtle shift in the 1960s and 70s in spawner abundance, with fewer fish spawning the San Joaquin River and Delta and more in the Sacramento River, presumably due to poor water quality (e.g., higher salinity) in the San Joaquin (Turner 1976). With so many recent changes in water quality, water flows, and fish species composition in the estuary, people are curious about the current abundance of striped bass in the San Joaquin River basin.

DFW targets striped bass for their population study during the spring spawning migration in the Sacramento River, and uses large fyke traps north of the city of Sacramento. These traps have two internal fykes that funnel fish into the nose of the trap. We at FISHBIO have been curious whether fyke traps could be used for a similar project to estimate the population of striped bass specifically in the San Joaquin River, and decided to assess the feasibility by conducting a pilot study. After visiting traps operated by DFW and the Department of Water Resources, a few weeks of hard work in the Fab Lab (see What the fyke?), and a survey of potential trap sites, we launched two fyke traps into the river in early May.

We fish the traps for 24-hour periods and check them each morning. Several species may be captured on a given day, providing a glimpse into the species composition of the river. To date, we’ve caught American shad, largemouth bass, white catfish, suckers – and many striped bass. We measure all the striped bass, examine them for existing tags or marks, and tag the legal-size fish with a yellow disk tag, following the same methods DFW has used for decades. We also insert a PIT tag into each striped bass. In the future, we could monitor individual striped bass moving into the river’s tributaries using PIT tag antennas attached to weirs throughout the basin. There is a reward for anyone who recaptures these disk-tagged striped bass and provides us with the relevant information. If you fish the San Joaquin River or South Delta, you may want to keep an eye out for our yellow tags. It could be your lucky day!