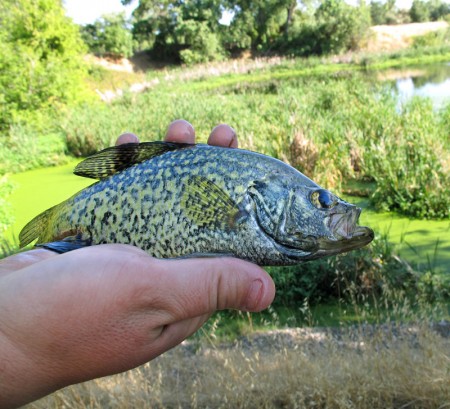 We’ve written about the alarming dominance of non-native fish in the California Delta (see, And The Winner Is…), but the issue of the increasing presence of non-native fish is not unique to California. According to a report by Sanderson and colleagues (2009) non-native, predatory fish, such as this black crappie, may pose as great a threat to imperiled Columbia River salmon and steelhead as do such factors as harvest and the hydro system. A review of existing data revealed that although 55% or more of the fish species in Oregon and Washington are non-natives, very few studies have quantified their impact on native taxa.

Columbia basin fisheries managers have focused research and reduction efforts on bird predation, sea lion predation and predation by the native northern pikeminnow. However, the impacts of non-native piscivores on native salmonids and the Columbia River food web are not well understood. The 2008 NOAA Fisheries Biological Opinion on the Federal Columbia River Power System requires federal dam operators, states and tribes to “coordinate to review, evaluate, and develop strategies to reduce non-indigenous piscivorous predation” (ISIB 2011). Fish such as this crappie will undoubtedly be receiving much more attention in the coming years.