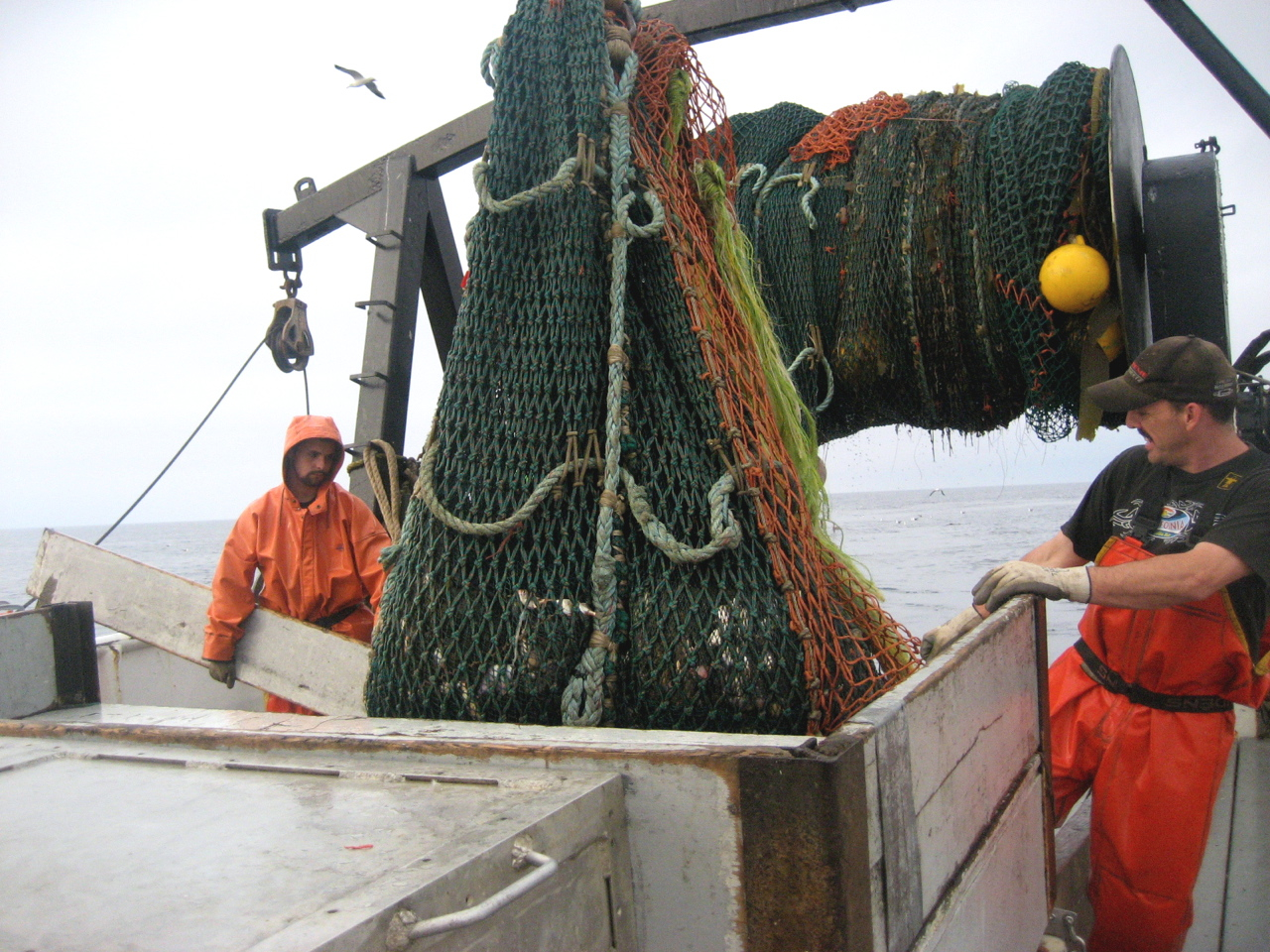 Traditional trawling methods (like those pictured above) have received considerable negative attention due to their adverse effects on the benthic ecosystem. Major concerns include destruction of the seabed and the high level of bycatch (“discards”) of fish and other benthic organisms. The bycatch is often discarded at sea because it is not considered marketable, and these organisms may experience high levels of mortality. A potential alternative fishing method is electrotrawling: instead of dragging a net with chains, ropes or beams along the seafloor, the net is fitted with electrodes that release electrical pulses, similar to an electrofishing boat. The electric pulses stimulate the nerves and muscles of benthic organisms, which respond by rising off the sea floor (either through a “startle reaction” or a “cramp reaction”) just as the net sweeps them up. The potential benefits of electrotrawling are reductions in damage to the seafloor, gear drag, fuel costs, and bycatch, since the electric pulses can be tuned to target different species and sizes. Researchers have been investigating the potential for electrotrawling for over 50 years, but much of the information was published in reports with limited distribution. A recent review article compiled these resources and produced a comprehensive overview of the opportunities and challenges of this alternative fishing method (Soetaert et al. 2013).

We have all been told that electricity and water don’t mix, so there are a few obvious technical challenges that electrotrawl developers face, including high power demand at sea, water resistance of the generators, electrode connections underwater, electrical material and efficiency, and, most importantly, crew safety. While some of these challenges have also been addressed in freshwater electrofishers, the distribution of the electric field in and around the fish is entirely different in seawater. The developers account for this by using reduced exposure times and voltage, and by using pulsed current instead of direct current to account for the high power demand needed at higher conductivity. Also, fluctuations in water temperature and salinity influence both the conductivity and the fishes’ behavioral response; thus, the trawl settings must be adaptable to varying conditions. Furthermore, little is known about the potential side effects (e.g., spinal injuries, cardiac arrest, hemorrhaging, or reduced growth) on marine organisms that are exposed to the current but not caught in the trawl or retained in the catch. Despite these challenges, the industry has slowly pressed forward in the development of electrotrawls, driven in part by high oil prices (which made traditional trawling less profitable) and international calls for more sustainable fishing practices.

Soetaert et al. (2013) described electrotrawls designed for flatfish, shrimp, and razor clams, all of which have demonstrated significant reductions in discards, and appear to have a reduced impact on the sea floor. A study of the flatfish pulse trawl reported a 30-50% reduction in discarded fish. Studies reported a decline in the catch of non-target fish and benthic organisms, as well as a reduction in catch of undersized individuals of target species. Clearly, electrotrawls are a promising alternative to traditional trawling with the potential to greatly reduce impacts on the marine ecosystem. However, additional research is necessary to investigate unwanted side effects on marine life and to acquire further reductions in discards.