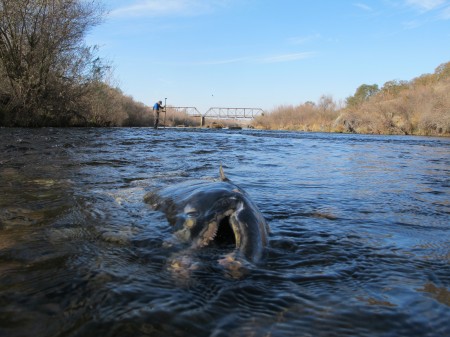 Fishermen are known for being superstitious. Bringing a banana on board or carrying your fishing pole through the house before going fishing are both considered extremely bad luck. But the supposedly unlucky number ‘13 actually brought a very good year for salmon fishing: 2013 more than lived up to the hype for West Coast fall-run Chinook salmon, according to preliminary estimates from the Pacific Fishery Management Council (PFMC). The preliminary abundance estimates for this past season were 862,500 Sacramento River Fall-run Chinook salmon (SRFC), based on returning salmon and fish harvest numbers, and an impressive 1,266,400 fall-run Chinook salmon returning to the Columbia River. Estimates of commercial and recreational ocean harvests of SRFC, which are included in the total abundance estimates above, are the highest since 2005, at 291,000 and 111,400 Chinook salmon, respectively. In contrast, river harvest was down 11% from last year at 55,500. Hatcheries reported 103,900 returning SRFC spawners, and escapement to natural areas was estimated at 300,800. Capping off these bumper numbers, recently released February forecasts for the Sacramento River fall-run Chinook suggest that 2014 has the potential to be another good year (see Figure 1). 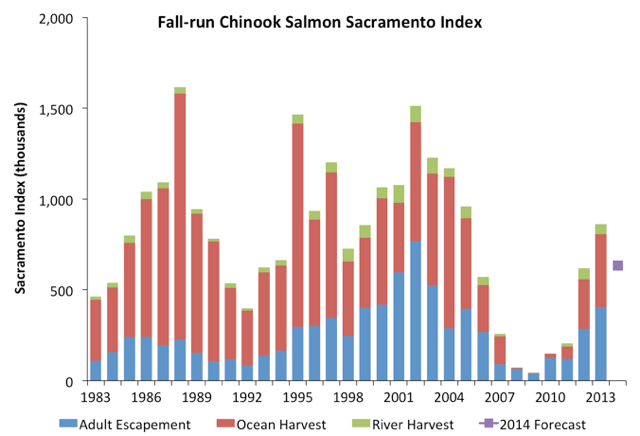 Figure 1. River harvest, ocean harvest, and adult escapement, which make up the Sacramento Index (SI). The February forecast for 2014 is also shown.

These current estimates of the 2013 season match up surprisingly well with preseason prediction, or forecast that PFMC typically releases in February. In 2013, the total Sacramento Index (SI) preseason prediction of SRFC, which includes ocean harvest, river harvest and total escapement for the Sacramento River basin, was 834,200 salmon. The preseason predictions of SRFC are based on the number of SRFC jacks in the escapement population during the previous fall. In the past, post-season estimates have varied greatly from preseason predicted values, which compelled PFMC last fall to alter their method of estimating future salmon abundance (switching from a linear regression to a logarithmic regression). This new method goes into effect starting with the 2014 preseason prediction.

Undoubtedly, the previous method needed improvement, and PFMC recognizes that more data are needed to further increase the accuracy of their estimates. However, the timing of the transition to the new method is a bit ironic because the 2013 SRFC February forecast of 834,200 (calculated using the old method) is almost spot on with the 2013 preliminary abundance estimate of 862,500. This year (2014) is the first year the PFMC is using the new prediction method, which is still based on jack returns. While the previous method for forecasting SI would have predicted only 476,342 Chinook salmon for 2014, the new formula predicts roughly 634,650 Chinook salmon.

The Columbia River Fall-run Chinook salmon stocks are usually the largest group contributing to the Chinook salmon fishery in the region north of Cape Falcon. These stocks include fish from the Lower River hatchery, Lower River wild, Bonneville Pool hatchery, Upriver Bright, Bonneville Upriver Bright, Pool Upriver Bright and Select Area Bright, and their abundances are key in determining management strategies for weak natural stocks in the PFMC management area. Preseason estimates for the combined total of these stocks in 2013 was forecasted at 686,900, but the actual returns were nearly double this at an estimated 1,266,400, which is the largest total for returns on record. The latest preseason forecast for 2014 suggests that 2014 salmon abundances will continue to be unprecedented, with 1,602,900 fall-run Chinook salmon predicted to return to the Columbia River, and 973,300 of those being Upriver Bright salmon.

February forecasts for 2014 suggest that commercial and recreational fishing regulations will remain unchanged from the 2013 regulations for SRFC and the Columbia River fall Chinook stocks. If these regulations are applied to the fishery in 2014, then the estimated spawning escapement (or the number of fish that “escape” the fishery) will be 328,567 SRFC and 533,811 Upriver Bright, which are well above the minimum escapement goals. If the forecasts are correct and fishing regulations remain the same, it looks like we can anticipate another busy year on the water for salmon boats.