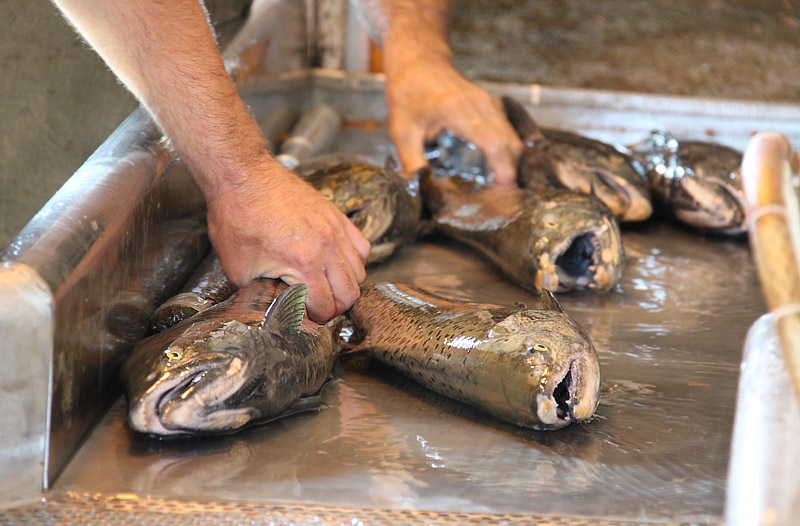 In order for a Chinook salmon to successfully reproduce in the Central Valley, it must survive one of the most challenging systems on the West Coast. Various factors ranging from predation, to entrainment into diversion pumps, and harvest for consumption contribute to reductions in salmon escapement. By definition, “escapement” is the portion of an anadromous fish population that escapes the commercial and recreational fisheries and reaches the freshwater spawning grounds. During the early months of the fall Chinook salmon run, many tributaries in the Central Valley have already counted more fish entering the spawning reaches this year than in the recent years since the collapse of the fishery.

Russian River Basin
California’s Russian River is within its own separate basin, but passage trends are similar to those seen in the Central Valley. Fall-run Chinook passages are counted by video monitoring at the Mirabel Rubber Dam, and total annual passage during the last couple of years has been on the rise. In 2010 total passage reached 2,414 salmon and this year (as of 10/26/11) 2,204 Chinook salmon have already been observed passing by the dam (Figure 5).

Columbia River Basin
Further north, at Bonneville Dam on the Columbia River, fall-run Chinook passages are on the rise and could easily match the season total from 2010 of 467,524 salmon, which exceeded the totals from the previous 5 years. This year to-date 400,064 Chinook salmon (as of 10/27/11) have been recorded passing the dam (Figure 6).

Although escapement is still low compared to counts in the early 2000s, before the collapse of the Central Valley fishery, this year is shaping up to be a year of decent Chinook returns across the West Coast.