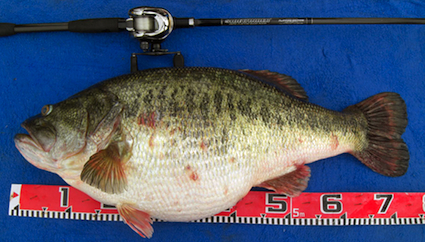 The International Game and Fish Association is said to be close to making a decision on the potential world record largemouth bass caught in Japan this summer. The 22 lb 4 ounce monster bass would tie the existing world record, if certified. The fish is 27 inches long with a girth of 26.77 inches! The current largemouth bass world record was captured in a Georgia lake and is considered the “holy grail” of freshwater angling records because it has stood for 77 years.

The record bass, a non-native species in Japan, has brought additional attention to increasing non-native and decreasing native fish populations. Largemouth bass were established in Japan from a plant of 90 fish from California waters in 1925, but due to the traditional culture in Japan at the time, bass fishing did not catch on until recently. Largemouth bass have spread such that they are now believed to live in most waters in Japan with suitable temperatures.

Largemouth bass are native to the central and southeastern United States, but due to planting for sportfishing purposes they now exist throughout the U.S., Canada, and the world. The U.S. Fish and Wildlife Service estimated that 43% of freshwater anglers fish for bass.

A YouTube video of the angler and bass is available here.