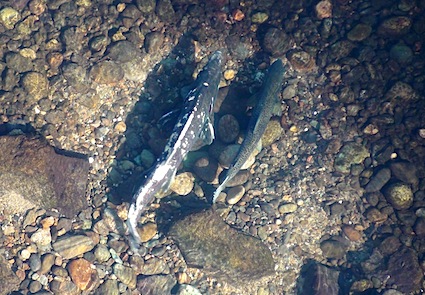 Fall-run Chinook adults are still trickling into various tributaries along the West Coast, leading to even higher numbers than were observed in 2009. Since higher numbers are good news, we are providing updated counts for comparison. For an explanation of the ocean conditions that contributed to these recent increases in returning salmon, see our previous Year-to-date post.

Although salmon numbers are up, people have been asking ‘What is going on with all the adipose fin-clipped (ad-clip) Chinook salmon observed in the San Joaquin Basin this year?’ To answer this question, we’ve put together some information regarding ad-clipped fish and present some possible explanations in a section following our updated adult return numbers. 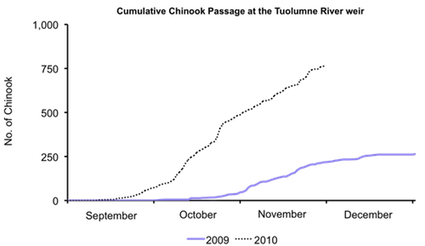 In the Sacramento River Basin, the count on the Yuba River is up at 3,024 adults (as of 11/29/10), representing a continuing, steady increase in annual abundance over the past four years (Figure 4). Battle Creek fall-run Chinook passages are on the rise as well with 10,967 passages (as of 11/15/10), exceeding last year’s total of 8,268, but still several thousand shy of exceeding passages from years prior (Figure 5). 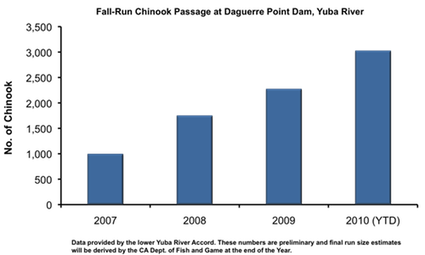 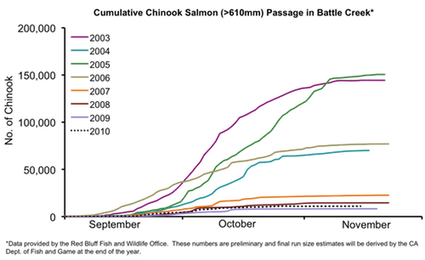 In California’s Russian River, adult Fall-run Chinook abundance has been on the rise in the last couple of years and has reached 2,414 as of 11/28/10 (Figure 6).

Further north, at Bonneville Dam on the Columbia River, the count is up to 467,765 as of December 13 and passage has surpassed totals from each of the past five (5) years (Figure 7). 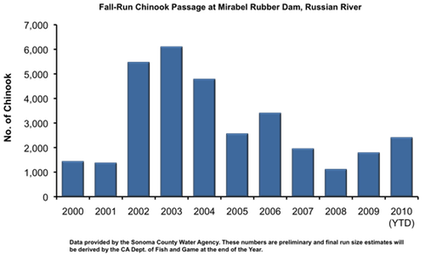 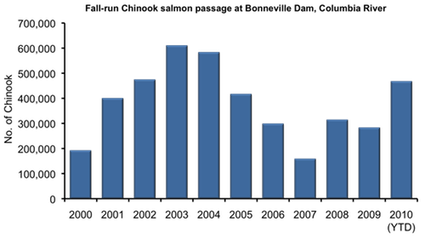 Adipose fins (the small fin behind the dorsal fin) are removed from Chinook salmon to indicate the presence of a coded-wire-tag (CWT) in their snout. CWTs are pieces of stainless steel wire 0.5 to 1 mm long that are injected into the snouts of salmon and contain specific information about the fish such as brood year, release date, and whether the fish is wild or came from a hatchery.

Many of the tributaries within the San Joaquin River Basin are seeing an unusually high percentage of ad-clipped Chinook salmon (>25%) compared with previous years (Table 1). Ad-clip passages recorded at the Stanislaus River weir (24.7% as of 12/6/10) have exceeded previous years and at the Tuolumne River weir (29.0% as of 11/30/10) have increased compared to our first sampling year (Table 1). Since neither of these two tributaries have hatcheries and no hatchery releases have been conducted into these tributaries since 2006, it is apparent that a tremendous amount of straying is occurring. Given that roughly 75% of hatchery fish are not clipped and assuming that un-clipped and clipped hatchery fish are equally likely to stray, it is likely that quite a few un-clipped hatchery fish also entered these two rivers in 2010. In previous years, straying of fish released off-site into San Pablo Bay has been estimated to be as high as 70% (CDFG & NMFS 2001) and may be found to be even greater once analysis of CWT data for the most recent years are completed.

We suspect that higher percentages of ad-clipped salmon in the San Joaquin Basin this year are due to a combination of factors including the implementation of a Constant Fractional Marking (CFM) program beginning in brood year 2007; the acclimation and release of a greater number of salmon smolts in San Pablo Bay in 2008; and low San Joaquin River Basin tributary juvenile abundance combined with low juvenile migrant survival through the lower San Joaquin River and Delta in 2008.

The CFM program is a goal that was set to consistently tag and mark at least 25% of all juvenile hatchery Chinook salmon that are released, in order to better evaluate the relative contribution of hatchery and wilds Chinook salmon populations within the Central Valley. Prior to 2007, there was no CFM for Central Valley hatcheries and relatively low numbers of juvenile hatchery fish were marked with coded-wire-tags (CWT) before being released. In 2007, Central Valley hatcheries purchased automated trailers (stations capable of tagging and clipping fish at a faster rate) and adopted the CFM program. Therefore, if an ad-clipped Chinook is spotted during an adult counting (i.e., adult escapement) survey, the fish will be checked for a CWT, which can be read back at the lab to determine from which hatchery the fish originated. Based on the life cycle of salmon, a Chinook that was tagged and released in 2008 would likely return to the Central Valley in 2010 to spawn. Thus explaining, at least in part, the increase in ad-clipped salmon.

In most years since 1993, a proportion of Chinook salmon smolts from three State Hatcheries (Nimbus-American River, Feather River, and Mokelumne River Hatcheries) have been released off-site into San Pablo Bay to improve survival. In recent years, 4-10 million juveniles have been released into the Bay. However, due to drastic declines of fall run Chinook salmon in the Central Valley system, the California Department of Fish and Game doubled the number of acclimation fish in 2008 resulting in about 20 million fish released into San Pablo Bay. Also in 2008, for the first time in over a decade, Coleman National Fish Hatchery acclimated and released 1.4 million smolts into San Pablo Bay.

Another factor to consider is that the San Joaquin Basin experienced some of the lowest fall-run Chinook adult salmon returns on record in the fall of 2007, and thus juvenile abundance was extremely low the following year (SJRGA 2009). In addition, survival of juveniles migrating through the lower San Joaquin River and Delta in 2008 was estimated to be low (USGS 2009). As such, low juvenile abundance combined with low survival in 2008 has likely contributed to the proportionally lower abundance of naturally spawned Chinook salmon observed in 2010.

Special thanks to Matt Saldate with East Bay Municipal Utility District and Alice Low with CDFG for providing data to us directly. Also, we thank the hosts of various websites where other data has been obtained.