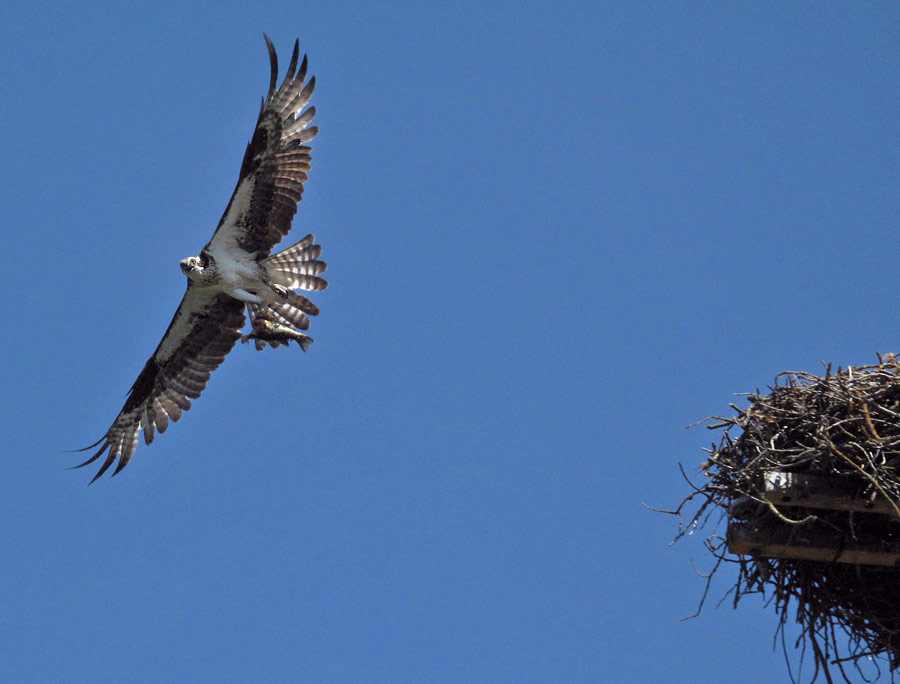 Early this week we spotted this osprey (Pandion haliaetus) returning to its nest after catching what appears to be a Sacramento sucker. Osprey are highly specialized hawks that locate prey by hovering high over open water, then diving head and feet first on to the unsuspecting fish (Sibley 2003). Ospreys and eagles are known to prey on adult salmon and trout, but many other birds prey on juvenile salmon and are of particular interest to fisheries managers. A breeding colony of double-crested cormorants in the Columbia River estuary is the largest in western North America, with more than 13,600 pairs consuming over 19.2 million salmon smolts. In 2007, 9,000 pairs of Caspian terns nesting on East Sand Island, near the Columbia River mouth, consumed an estimated 4.8 million to 6.2 million salmon smolts. On Brooks Island in the San Francisco Bay researchers found 2,079 coded-wire tags (CWT) from hatchery reared Chinook salmon smolts, when they sampled just 12% of the Caspian tern nesting habitat on the island (Evans et al 2011). The U.S. Army Corps of Engineers and the U.S. Fish and Wildlife Service are currently enhancing bird habitat in southern Oregon and California and reducing nesting habitat on East Sand Island in an effort to lure birds away reduce the density of birds in nesting colonies and predation pressure on Columbia River outmigrating salmon smolts.